Water on and in the Earth 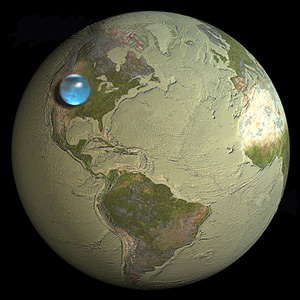 Picture of Earth showing if all Earth’s water (liquid, ice, freshwater, saline) was put into a sphere it would be about 860 miles (about 1,385 kilometers) in diameter. Diameter would be about the distance from Salt Lake City, Utah to Topeka, Kansas, USA.

The majority, about 69 percent, is locked up in glaciers and icecaps, mainly in Greenland and Antarctica. You might be surprised that of the remaining freshwater, almost all of it is below your feet, as ground water. No matter where on Earth you are standing, chances are that, at some depth, the ground below you is saturated with water. Of all the freshwater on Earth, only about 0.3 percent is contained in rivers and lakes—yet rivers and lakes are not only the water we are most familiar with, it is also where most of the water we use in our everyday lives exists.

In the pie charts above, the top pie chart shows that over 99 percent of all water (oceans, seas, ice, most saline water, and atmospheric water) is not available for our uses. And even of the remaining fraction of one percent (the small brown slice in the top pie chart), much of that is out of reach. Considering that most of the water we use in everyday life comes from rivers (the small dark blue slice in the bottom pie chart), you’ll see we generally only make use of a tiny portion of the available water supplies. The bottom pie shows that the vast majority of the fresh water available for our uses is stored in the ground (the large grey slice in the second pie chart).

For a detailed explanation of where Earth’s water is, look at the data table below. Notice how of the world’s total water supply of about 332.5 million cubic miles (about 1,385 million cubic kilometers) of water, over 96 percent is saline. And, of the total freshwater, over 68 percent is locked up in ice and glaciers. Another 30 percent of freshwater is in the ground. Thus, rivers and lakes that supply fresh surface water for human uses only constitute about 22,300 cubic miles (93,100 cubic kilometers), which is about 0.007 percent of total water, yet rivers are the source of most of the water people use. 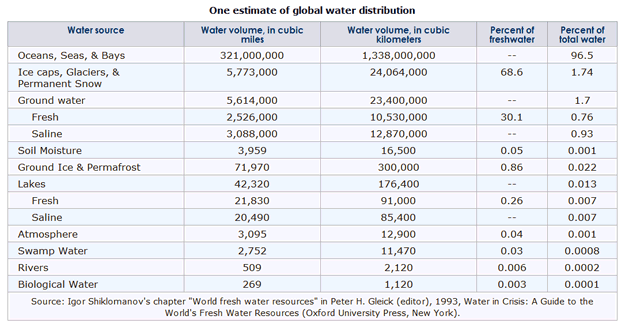