Rain and snow are key elements in the Earth’s water cycle, which is vital to all life on Earth. Rainfall is the main way that the water in the skies comes down to Earth, where it fills our lakes and rivers, recharges the underground aquifers, and provides drinks to plants and animals. 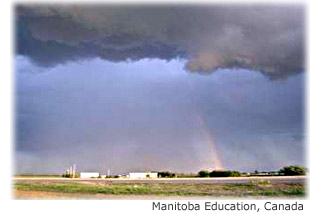 Fortunately for everyone, water is a renewable resource that moves in a cycle with neither beginning nor end. Water vapor (evaporated from oceans, lakes, forests, fields, animals, and plants) condenses and returns to Earth as precipitation, once again replenishing reservoirs, lakes, rivers, and other sources of water and providing the moisture required by plants and animals.s

The amount of precipitation that falls around the world may range from less than 0.1 inch per year in some deserts to more than 900 inches per year in the tropics. One of the driest spots on Earth is Lquique, Chile, where no rain fell for a period of 14 years. The world’s wettest spot, as shown by data collected from a rainfall gage operated by the U.S. Geological Survey, is on Mt. Waialeale, Hawaii, where an average of more than 451 inches of rain falls each year, and where more than 642 inches fell from July 1947 to July 1948. Although Mt. Waialeale averages slightly more rain per year, Cherrapunji, India, holds the single year record of 905 inches measured in 1861.

By contrast, the conterminous (48) United States receives enough precipitation during an average year to cover the States to a depth of about 30 inches. This is equivalent to about 1,430 cubic miles of water each year and would weigh about 6.6 billion tons. What happens to the water after it reaches the ground depends upon many factors such as the rate of rainfall, topography, soil condition, density of vegetation, temperature, and the extent of urbanization.

For example, the direct runoff in a highly urbanized area is relatively great, not only because of the density of roofs and impermeable pavements permits less rain to infiltrate the ground, but also because storm-sewer systems carry more water directly to the streams and lakes. In a more natural or undeveloped area, the direct runoff would be considerable less.

In the United States, an average of some 70 percent of the annual precipitation returns to the atmosphere by evaporation from land and water surfaces and by transpiration from vegetation. The remaining 30 percent eventually reaches a stream, lake, or ocean, partly by overland runoff during and immediately after rain, and partly by a much slower route through the natural ground-water reservoir.

Much of the rain that enters the ground filters down into subsurface water-bearing rocks (aquifers) and eventually reaches lakes, streams, and rivers where these surface-water bodies intercept the aquifers. The portion of the precipitation that reaches the streams produces an average annual streamflow in the United States of approximately 1,200 billion gallons a day. By comparison, the Nations’s homes, farms, and factories withdraw and use about 400 billion gallons a day.