Facts and figures about water, erosion and sedimentation

Erosion is defined as the wearing away and transport of the soil by running water, glaciers, wind or waves. Sedimentation is the process of settling and depositing by gravity of suspended matter in water. 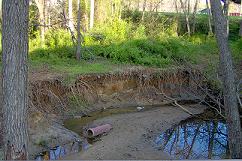 Water transforms landscapes and moves large amounts of soil and fine-grained materials in the form of sediment. Sediment is:
1) eroded from the landscape,
2) transported by river systems and eventually
3) deposited in a riverbed, wetland, lake, reservoir or the ocean.
Material dislodged by erosion is transported when exposed to fluvial erosion in streams and rivers. Deposition occurs on flood plains, bars and islands in channels and deltas while considerable amounts end up in lakes, reservoirs and deep river beds.

Plants in wetlands and on the banks of rivers are of particular importance as they slow down the flow of the water and their roots bind the soil, thus preventing erosion.

Sediments occur in water mainly as a direct response to land-use changes and agricultural practices, although sediment loads can occur naturally in poorly vegetated terrains and most commonly in arid and semiarid climates following high intensity rainfall.

A recently documented and increasing source of high sediment loads is the construction of new roads in developing countries where little consideration is given to the impacts of such actions on aquatic systems and downstream water supplies.

Coastal erosion results from altered currents and sediment loads caused by changes in coastal and upstream land use. The beaches of Tangiers in Morocco, for instance, largely disappeared in the 1990s after new ports were built. The destination lost 53% of its international tourist night-stays and substantial tourism income, estimated at about US $20 million per year.