HER MAJESTY THE WATER – THE QUEEN OF LIFE (part 1)

Half-moon is throwing dim light. The moon gleam slightly fluxing and refluxing is flowing down over a small foreyard in a typical Central Asian homestead. There is an “ayvan” * in the middle of the yard and on one side of it over the “aryk” ** there is a wooden wheel steadily rotating. This is a “chigkyr” *** . It ladles out water with its large jars from the wide aryk. And Н2О flows down through inclined flumes towards furrows in the vegetable garden and further on to the fields cultivated on the other side of the “dooval” **** . The land is drinking water. The chygkyr stops rotating at the dead of night. And it starts having dreams that flow down from the ruthful half-moon high in the sky.

Those deprived of words never enjoy any human rights.
We’re polluters of Nature’s ancient depths – to the most,
See dolphins leaping out to beaches on ocean coasts –
Agonizing in silent, crazy and desperate loss of lives.

Cut trunks of former trees make no complaints.
Mountains sag under the load of radar sets.
Nuclear darkness is spreading through plains,
And wordless grass is drying out doomed to death.

For two millenniums we’ve been begging in Christ’s name,
But still proceeding to exist, completely being lost to shame.
The Lord! To whom thou gavest the human word and rights!
To whom? Indeed! And what was it for? For how many ages have we been failing to reach an agreement? Just try to count them all.

Well, then … why not just talk it over?

Recently there had been a display of new limousines in Detroit. To millionaires’ joy a row of super cars were exhibited standing in splendor and boasting of six hundred horse powers engines each. One can only fancy, if every nation in the world procures somewhat ten such herds, then half the planet ought to be sown with oat to feed all the horses.

* A dais installed in a traditional way at some place comfortable for rest and having meals or receiving guests and honorable visitors, as well as conducting various family events. In continental arid climate it is usually located in the shade under trees and over some waterway (canal, irrigation ditch, etc.).

** It is an irrigation ditch (in Central Asia).

*** A device in the form of a rotating wheel designed for elevating irrigation water (used from time immemorial).

**** A clay fence that is usually erected around a homestead. 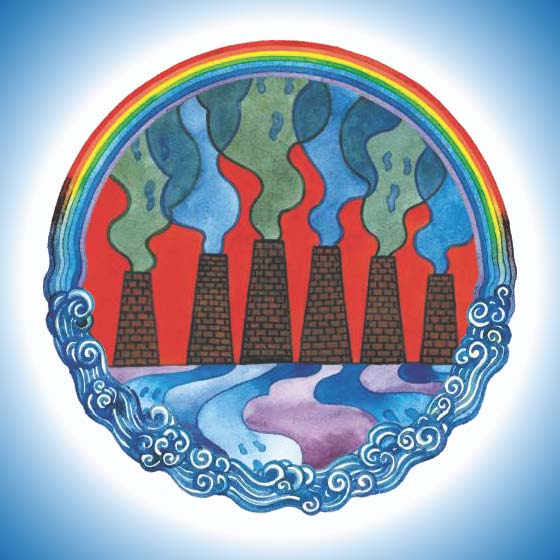 But in the case in question not oat crop is needed – powerful cars demand oil! It is Fuel. How much of it will people need to maintain this family of luxury cars? Okay, let’s imagine that we managed to feed them all. Then another global challenge will emerge to its full extent. What air will our great granddaughters and sons breathe in? Ah?.. The air generated by the seas and oceans? It might be so, if it were not for tankers and the disaster which befell the clean waters of these seas and oceans when oil flushes from liquid cargo carriers in consequence of frequent shipwrecks.

To envisage such a disaster is inconceivable – one gets just dumbfounded. Miserable waterfowl perish loosing ability to take wing, dead fish swing with desecrated sea waves. And what’s about us?.. As to us we’ve been talking, talking all the way, and so far still fail to hit upon new kinds and sources of energy able to substitute oil in terms of efficiency. Oil,.. oil,.. oil… It is like blood throbbing in the planet’s body. We have been pumping it out and burning more and more. Reduced to smoke it vanishes from the face of the earth, while augmenting amount of gold stored up by oil deposits owners. Just think – Gold and Blood of the planet! Hasn’t human blood been flowing during endless wars for the sake of wild wealth?
And just as smoke of burning oil – human souls have been departing up to the sky. A very strange coincidence, isn’t it?
Oh, yes! We cannot do without energy. However, with oil it will be a bad look for us in the long run. It’s time to recall that there is Her Majesty Water lapping against the shores in the oceans, seas and rivers. It is water that might help us wash our souls clean, wash away the tendency for robbery, wash off evil propensities for mincemeat of each other and, of course, stop damaging Nature. One should start striving for perception with our hearts of water’s living sounds in order to conceive life-giving meaning of its value. And hopefully water will give us help, save present and future generations of people from madness and agonizing mutual destruction.
Childhood reminiscences… we, kids, used to feast our eyes upon puddles stained with petrol opalescent patterns. They seemed to be so picturesque. But this was in unreasonable childhood, when even delinquencies might be taken as a kind of noble deeds. And fakirs in circuses amazed us – boys and girls – when they spewed fire out of their mouths. Now I wonder what made them do it – keeping petrol behind the cheeks so as to surprise us and make money.
Today it seems to me, now and then, that some monstrous fakir has been towering above all of us, and glow of a fire suddenly starts heaving over the whole of our planet, whereas waves of pure sweet water are streaming away from the mankind so as to attain its objective – to return and take vengeance on us for greediness and failure to understand the essence of one sacred gift of Nature – titled Life.