Facts and figures on water and children

Of the 1.3 billion people living in abject poverty, the majority are women and children. They also happen to be the largest group systematically under-represented in water management arrangements. 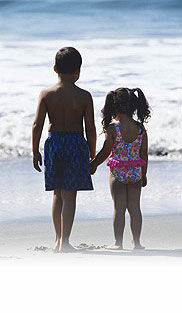 Some 3,800 children die every day from diseases associated with lack of access to safe drinking water, inadequate sanitation and poor hygiene.

People’s effectiveness in managing and using water is only brought about with the provision of a basic education on water, sanitation and hygiene. If children are taught proper hygiene, primary schooling can transform them into health educators for their families, thereby passing on vital information and skills that can reduce household vulnerability to deadly diarrhoeal diseases by at least 40%.

In a refugee emergency, especially when there is a large influx in a short period, water is often not available in adequate quantity and quality, creating major public health hazards in refugee settlements, with young children being primary victims.

In some countries, because of an inadequate water supply, over 40% of refugee school children regularly skip classes to help their mothers collect water.

Girls make up most of the 115 million children currently out of school, and 80% of children not attending primary school in West/Central Africa, South Asia and Middle East/North Africa had mothers with no formal education at all. Reasons for this include the need for girls and women to walk long distances to bring water to the home and/or lack of sanitation facilities in schools.

The amount of time spent in collecting water – a task mainly performed by women and children – is increasing in many areas. Water supply must, therefore, also be viewed as a social issue and, more specifically, a gender issue.

Access to safe drinking water and sanitation reduces the burden on women and girls from looking after sick children or siblings and from water carrying, giving them more time for productive endeavours, education and leisure.

The Government of Pakistan has implemented the Punjab Rural Water Supply and Sanitation Sector Project, which provides safe drinking water and drainage facilities to about 800,000 people by using a community-based, participatory, demand-driven approach. The main impact of the project was to free women and children from the hard labour of carrying water. As a result, there is a reported 90% decrease in water-related diseases and as much as an 80% increase in the enrolment of school children in some communities.