Facts and figures about water and migration

Migration is considered one of the defining global issues of the early 21st century, as more and more people are on the move today than at any other point in human history. 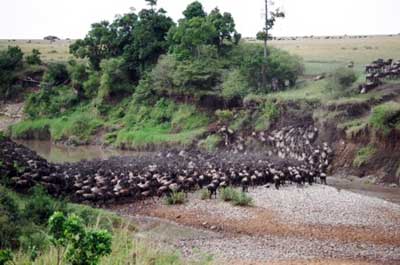 The International Organization for Migration (IOM) estimates that now there are about 192 million people living outside their place of birth, which is about 3% of the world’s population. From these migrants, there are at least 25 million environmental refugees.
People who have been forced to leave their traditional habitat, temporarily or permanently, because of a marked environmental disruption (natural and/or triggered by people) that jeopardized their existence and/ or seriously affected the quality of their life are called ‘environmental refugees’.

Water scarcity leads to migration to other areas with better living conditions and/or where usable water is still available in sufficient quantities.

When global warming takes hold, there could be as many as 200 million people overtaken by disruptions of monsoon systems and other rainfall regimes, by droughts of unprecedented severity and duration, and by sea-level rise and coastal flooding.

While Sub-Saharan remains the prime locus of environmental refugees, there are sizeable numbers in other regions and countries. At least 6 million of China’s 120 million internal migrants should be regarded as environmental refugees, having been obliged to abandon their farmlands due to shortages of agricultural plots following decades of population growth. In Mexico there are 1 million new environmental refugees each year; some move to cities definitely, and a few return home, leaving a cumulative total of at least 2 million in 1995. Finally there 10 million new refugees per year displaced involuntarily because of public works projects, notably large dams, (with a cumulative total of 50 million in just China and India).

Mass migration is a major consequence of desertification. Some 60 million people are expected to move from the desertified areas of Sub-Saharan Africa towards Northern Africa and Europe between 1997 and 2020.

Large displacements of population can cause instability or conflict in the host country, country of origin, or within a region. They entail depletion of scarce resources, overcrowding, shortage of potable water and unsanitary conditions that can lead to disease epidemics. If sustainable systems are not put in place, water sources may be depleted and/or contaminated, which eventually could be a source of serious friction with local host communities.

In the Brazilian northeast, during times of drought, most men migrate for wage employment and women become the heads of the household. These women are known as widows of the drought.