Facts and figures about the Aral Sea

The Aral Sea Basin has a total area of 2.7 million km2 and it is shared by seven countries: Afghanistan, Kazakhstan, Kyrgyzstan, Tajikistan, Turkmenistan, Uzbekistan and the Islamic Republic of Iran. 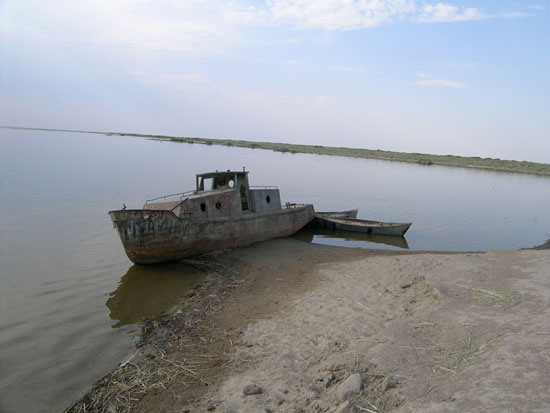 The Aral Sea was once the world’s fourth largest inland sea. Problems began in the 1960s and 1970s with the diversion of the inflowing Amu Dar’ya and Syr Dar’ya rivers in order to grow cotton on arid land in what was then Soviet Central Asia. Ninety-four water reservoirs and 24,000 km of channels were constructed on these two rivers to support the irrigation of 7 million ha of agricultural land.
In 1963, the surface of the Aral Sea measured 66,100 km2, with an average depth of 16 metres and a maximum depth of 68 metres. The salt content was 1%. By 1987, 27,000 km2 of former lake bottom had become dry land. About 60% of the Aral Sea’s volume had been lost, its depth had declined by 14 metres, and its salt concentration had doubled. By the 1990s it was receiving less than one-tenth of its previous flow — and sometimes no water at all.

At present, about 200,000 tonnes of salt and sand are carried by the wind from the Aral Sea region every day, and dumped within a 300 km radius. The salt pollution is decreasing the area available for agriculture, destroying pastures, and creating a shortage of forage for livestock. The livestock population has become so low in the region that the government has issued a decree to reduce their slaughter for food.

The consequences for health have been just as bad. People in Qyzlorda in Kazakhstan, Dashhowuz in Turkmenistan and Karakalpakstan in Uzbekistan receive water contaminated with fertilizers and chemicals, unsuitable for human consumption or agriculture.

Drinking water in the region contains four times more salt per litre than the limit recommended by the World Health Organization (WHO).

Tuberculosis has reached epidemic proportions. In some towns there are an estimated 400 cases out of a population of 100,000.

Infant mortality rates have reached 100 per 1,000 live births in some regions—higher than the average for South Asia. Some 70% of the 1.1 million people in Karakalpakstan suffer from chronic maladies—respiratory illnesses, typhoid fever, hepatitis and oesophageal cancers.

The independence of the Central Asian states has failed to stem the crisis. In fact, their lack of cooperation has sustained a steady deterioration in indicators of livelihoods, health and well-being. Cotton yields have fallen by a fifth since the early 1990s, but the overuse of water continues. The loss of four-fifths of all fish species has ruined the once vibrant fishing industry in downstream provinces. Whereas in 1959 the Aral Sea’s fisheries produced almost 50,000 tonnes of fish, by 1994 the annual catch was only 5,000 tonnes.

Through a joint project with the World Bank initiated in 2001, Kazakhstan has built the Kok-Aral Dam and a series of dykes and canals to rehabilitate water levels in the northern (and eventually southern) parts of the Aral Sea. The project is already yielding benefits: the northern sea’s area has expanded by a third, and water levels have risen from about 29 metres to about 40 metres. If progress continues, prospects for rehabilitating fishing communities and restoring sustainability are promising. If other basin countries also get involved, the scope for basin-wide rehabilitation would increase greatly.