Cracking the problem of river growth

A general mathematical theory that predicts how cracks spread through materials like glass and ice can also predict the direction in which rivers will grow, according to a new MIT study. 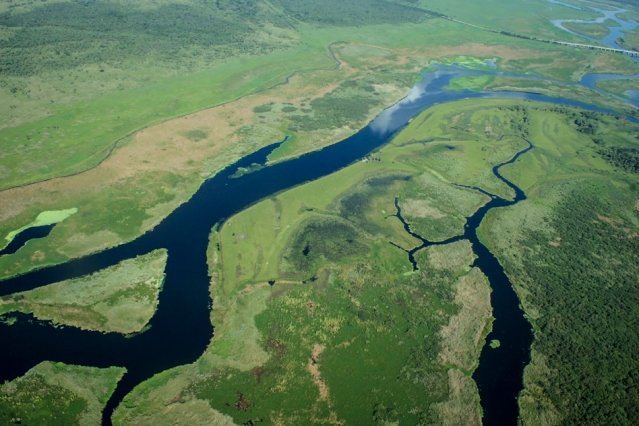 In fracture mechanics, the theory of local symmetry predicts that, for example, a crack in a wall will grow in a direction in which the surrounding stress is symmetric around the crack’s tip.

Scientists at MIT have now applied this theory to the growth of river networks, finding that as a river fed by groundwater cuts through a landscape, it will flow in a direction that maintains symmetric pressure from groundwater around the river’s head.

The group tested the theory on 255 streams in the Florida Panhandle, and found that streams grow in a direction consistent with symmetry. The local groundwater flow — and specifically, the height of the underlying water table — therefore plays a large role in directing a river network’s evolution.

Daniel Rothman, a professor of geophysics in MIT’s Department of Earth, Atmospheric and Planetary Sciences, says that what typically drives a river’s growth is a complicated mix of physical processes that contributes to landscape erosion. The details of these processes are poorly understood.

“Really, what we’re trying to do is express the growth of a river in a way that is independent of the complicated mechanism of erosion,” Rothman says. “Symmetry is a basic physical idea that applies in a variety of settings. By hypothesizing its relevance to channel growth and showing that it works, we can identify the growth of river networks with the class of phenomena that can be described in this way.”

The researchers say the theory of local symmetry may also be used to predict the growth of other branching systems, such as geological faults, root systems, and even neural networks.

The study is published in the Proceedings of the National Academy of Sciences. The study’s authors are Rothman, postdoc and lead author Yossi Cohen, graduate student Robert Yi, former postdocs Olivier Devauchelle and Hansjorg Seybold, and Piotr Szymczak of Warsaw University in Poland.

“The problem of the growing stream”

In 2012, Rothman’s group developed a mathematical theory for river growth that identified a common angle at which river valleys branch. Cohen joined the group shortly after, having worked on problems of fracture mechanics while completing his PhD in theoretical physics. While studying the mathematical principles underlying river networks, Cohen recognized some similarities with theories of fracture mechanics.

“The physical processes are completely different, but there are commonalities in the mathematics,” Cohen says. “So we thought, ‘OK, maybe we can use some of the well-developed theories in fracture mechanics to solve the problem of the growing stream.'”

The researchers applied the fracture mechanics theory of local symmetry to river growth, and found that whether a river grew to the left or right, or straight ahead, depended on the pressure of the surrounding groundwater, or the underlying water table.

Groundwater saturates soil and can be stored in large underground aquifers, the top of which is called the water table. The height of a water table can dip and rise, much like the hills and valleys of a landscape. Higher parts of a water table create more groundwater pressure below, which can ultimately be released by flowing into a river, thereby growing the river incrementally.

By applying the theory of local symmetry to river growth, the researchers found that a river will grow straight when the pressure contour of the surrounding water table is symmetric around the river’s head. The theory also predicts the angle at which a river would turn.

To test the theory, the group analyzed an intricately branching river network in Bristol, Florida, where Rothman’s group has previously studied river growth. The researchers calculated the position of the water table around 255 branching streams in the river network. From the contours of the water table, they established the degree of symmetry in every region around a stream tip. Then, they examined whether the streams grew in the direction predicted by the local symmetry theory.

They found that enough streams agreed with the predictions to confirm that the theory did apply, not just to fractures and cracks, but also to river growth.

Having validated the theory, the researchers then used it to calculate a ‘growth exponent’ — a number that relates the flow of groundwater to how fast a stream is growing. They then calculated the velocity of all 255 streams in the river network, and determined the optimal growth exponent that minimizes deviations from the predictions of local symmetry.

Rothman says the group’s method in applying the local symmetry method may have applications in other areas of network growth, such as geological fault networks.

“In any problem where there is growth in response to a field which can be characterized as diffusive, our ideas here should apply,” Rothman says.