For eons, powerful tides have raged through Puget Sound, ripping along at 11 feet per second at their peak, predictable as the phases of the moon.

Three years from now, a local utility hopes to begin converting a portion of that raw energy to electricity, part of a growing effort to harness the tides to power homes and businesses miles from the smell of salt air. 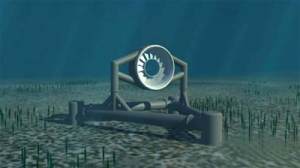 What does it take to harness the power of the tides? Something like this marine turbine, pictured above, of which there are two currently installed in a narrow tidal passage of Admiralty Inlet in Wash. Credit: Snohomish County PUD.

The Snohomish County Public Utility District’s pilot project is small — two turbines with 500 kilowatts of total capacity and an average output of 50 kilowatts — hardly a panacea for all that ails the United States’ energy portfolio. But tidal power is garnering increasing attention as a niche supplier of renewable alternative energy in Washington, Maine and Alaska. The tides, some say, have the potential to light five percent of the nation’s homes — nearly nine gigawatts of generating power.

“There is a realization that a diversified suite of renewable energy resources will displace fossil fuel,” said Monty Worthington, who is directing a tidal energy project in Alaska for the Maine-based Ocean Renewable Power Co. “To establish a place in the emerging marine renewable market, the time for [U.S.] investment is now.”

To that end, earlier this fall, the Snohomish County utility, which serves 320,000 customers north of Seattle, won a Department of Energy grant covering half the costs of its $20 million tidal energy pilot project. Two 30-foot tall turbines will operate 200 feet beneath the surface in the narrow tidal passage of Admiralty Inlet, between the Olympic Peninsula and Whidbey Island, Wash. When fully developed, the Puget Sound project could power tens of thousands of homes, the utility says.

“Solar is not yet economically competitive in the Northwest,” he said. “And given wind’s transmission and integration challenges, we would prefer to add more predictable — and potentially more local — resources such as tidal and geothermal.”

The Puget Sound initiative is the first to be launched by a public utility in the Pacific Northwest. Tidal energy has made headway in recent years in Europe and Canada, and it is attracting growing interest inside the United States. Ocean Renewable Power is testing a turbine in Maine and has plans for a project in Alaska’s Cook Inlet, which boasts the second-highest tidal range in the world.

Technology hurdles remain a huge issue. Solar and wind have seen considerable advancement in technology the past decade. But tidal energy — at least in the United States — has arguably been taken seriously only in the last five years. And while it will likely never be as ubiquitous as wind and solar, it is more predictable — a highly desirable trait for utilities looking for carbon-free baseload generating power.

At a basic level, a tidal turbine works fundamentally like a wind turbine. Instead of wind, tidal flows turn the turbine, converting the kinetic energy of moving seawater into electrical energy. Despite its promise, however, today there are less than a dozen tidal turbine projects operating worldwide, and few look alike.

“That’s very unlike the wind turbine situation, where a non-expert at any distance can’t tell one company’s turbine from another,” said Paul Jacobson, the ocean energy leader at the Electric Power Research Institute.

Tidal energy technology is also changing so quickly that it doesn’t make sense to build a full tidal turbine farm at the outset, but rather adapt to technology innovations on a short term basis, said Collar.

“As the industry matures,” added Brian Polagye, a mechanical engineer at the University of Washington in Seattle, “it should be possible to design turbines that are both highly efficient and robust, but we’re still in the learning stages.”

The U.S. lags Europe in all renewable energies, said Collar, and tidal energy is no exception. That’s changing.

In addition to public utilities, startup companies like Ocean Renewable Power Co. are now getting involved with the tacit understanding that even if tidal energy’s potential is limited, it can still be profitable.

This year Ocean Renewable started testing a tidal system in Cobscook Bay and West Passage, Maine. The company claims that within a decade, tidal energy could become a billion dollar industry in Maine alone, generating both electricity and hundreds of jobs.

The company is also planning a 2012 pilot project for Cook Inlet, Alaska, with a follow-on commercial project that could potentially provide ten percent of the energy needs for a majority of the state’s electrical grid.

Domestic interest is such that, experts say, the U.S. tidal energy market may overtake Europe in a few years.

“This technology could develop much faster in North America than Europe, where we are notoriously risk-averse and slow,” said Peter Fraenkel, technical director of the U.K.’s Marine Current Turbines Ltd.

Indeed, last month the British government withdrew support for a $24 billion tidal energy project across the Severn Estuary that could have generated five percent of the United Kingdom’s electricity.

The project is one of the world’s most ambitious renewable energy projects, but a recent assessment pegged the project’s true cost at closer to $54 billion. Environmentalists have also attacked it for destroying marsh and mud flats used by thousands of birds. The British government said it couldn’t justify such a high-risk, high-cost project, though private backers have vowed to continue without government support.