The Mosi-oa-Tunya / Victoria Falls National Park contains one of the world’s most spectacular waterfalls. The falls and associated gorges are an outstanding example of river capture and the erosive forces of the water still continues to sculpture the hard basalts. The complex of conservation areas in Zimbabwe covers over 1,846,700 ha excluding forest reserves. 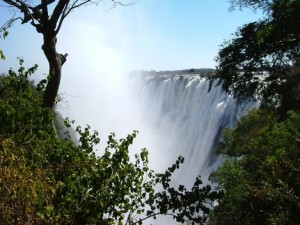 The park abuts Dambwa Forest Reserve in Zambia. The falls are the most significant feature of the park, and when the Zambezi is in full flood (usually February or March) they form the largest curtain of falling water in the world. During these months, over 500 million litres of water per minute go over the falls, which are 1,708 m wide, and drop 99 m at Rainbow Falls in Zambia. At low water in November flow can be reduced to around 10 million litres per minute, and the river is divided into a series of braided channels that descend in many separate falls.

Below the falls the river enters a narrow series of gorges which represent locations successively occupied by the falls earlier in their history. Since the uplifting of the Makgadikgadi Pan area some 2 million years ago, the Zambezi River has been cutting through the basalt, exploiting weak fissures and forming a series of retreating gorges. Seven previous waterfalls occupied the seven gorges below the present falls, and Devil’s Cataract in Zimbabwe is the starting point for cutting back to a new waterfall that will eventually leave the present lip high above the river in the gorge below.

The predominant vegetation is mopane forest, with small areas of teak and miombo woodland and a narrow band of riverine forest along the Zambezi. The riverine ‘rainforest’ within the waterfall splash zone is of particular interest, a fragile ecosystem of discontinuous forest on sandy alluvium, dependent upon maintenance of abundant water and high humidity resulting from the spray plume. There are a lot of tree species within this forest and also some herbaceous species.

Concerning the fauna, several herds of elephant occur in Zambezi National Park, occasionally crossing to the islands and Zambian mainland during the dry season when water levels are low. There are small herds of buffalo and wildebeest, as well as zebra, warthog, giraffe, bushpig and hippopotamus are frequent above the falls. Vervet monkey and chacma baboon are common. Lion and leopard are occasionally seen. Taita falcon breeds in the gorges, as do black stork, black eagle, peregrine falcon and augur buzzard.

Victoria Falls forms a geographical barrier between the distinct fish faunas of the upper and middle Zambezi River. 39 species of fish have been recorded from the waters below the falls.

Ethnic composition of the people living in the falls area outside the parks is a mixture of recent immigrants and long-term occupants, witnessed by stone artefacts of Homo habilis from 3 million years ago which have been found near the falls, indicating prolonged occupation of the area in the middle Stone Age. Weapons, adornments and digging tools indicate the presence of hunter-gathering communities in the late Stone Age, displaced about 2,000 years ago by farmers using iron tools, which kept livestock and lived in villages.

These are among the most spectacular waterfalls in the world. The Zambezi river, which is more than 2 km wide at this point, plunges noisily down a series of basalt gorges and raises an iridescent mist that can be seen more than 20 km away.