Warning that a world without water will be very unstable, Secretary-General Ban Ki-moon today called for a three-pronged strategy to ensure that the poorest inhabitants of the developing world have access to clean water and basic sanitation within seven years. 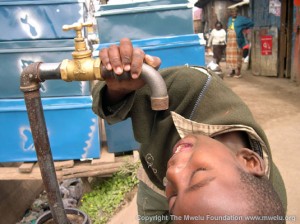 Mr. Ban told participants at “One World One Dream: Sanitation and Water for All,” an event held at United Nations Headquarters in New York, that the world faces an uphill battle to achieve the Millennium Development Goal (MDG) calling for the proportion of people with access to safe drinking water by the target year of 2015.

“Current trends are disturbing,” he said. “To meet the sanitation target by the year 2015, about 173 million people will need to gain access to sanitation each year between now and then. That will be an immense undertaking; over the past decade-and-a-half, new sanitation services reached an average of about 76 million people per year.”

The situation is especially alarming in sub-Saharan Africa, where the number of people with access to basic sanitation needs to be increased six-fold by 2015 to reach the target.

Mr. Ban said the extreme weather phenomena associated with climate change is exacerbating the problem, and forecast that as many as 2.8 billion people will live in countries facing water stress or water scarcity by 2025.

“A world short of water will be an unstable world. Yet the worst need not happen. We know what the problems are, and what to do about them.”

The Secretary-General said the first step is to take concrete measures to build infrastructure, transfer technology and scale up good agricultural practices so as to produce more food with less water.

The management of water resources, including by public utilities and in rural areas, needs to be improved, he added, particularly given the impact of climate change.

Investment must also be expanded so that poor countries can close the gaps to achieve the MDG concerning water and sanitation.

“The estimated cost of closing the gap between current trends and what is needed to meet the target ranges from $10 billion to $18 billion per year. That is in addition to the $54 billion per year required to maintain existing water and sanitation systems.”

Today’s event brought together leaders from civil society, the private sector and governments, including Prince Willem-Alexander of the Netherlands and top officials from Tajikistan, Germany, Japan and Tanzania.