Can the sun’s energy be used to clean water? 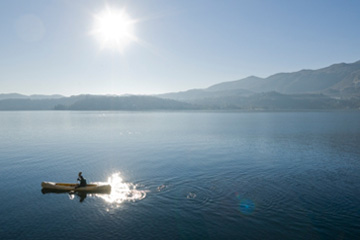 The sun plays such an important role in sustaining life on Earth, but did you know that its power can also be harnessed to help clean water?

Water is essential to human life, and it’s no mystery that the sun plays an important role in the water cycle on our planet, as water moves from clouds to rain to rivers, lakes and oceans, and back again. Scientists have discovered several ways to use the sun’s energy and the processes of evaporation and condensation to help sanitize water and make it safe to drink.

One of the simpler methods involves the use of solar stills. One of the first solar stills was developed in the 19th century when mine owners in Chile faced the problem of providing drinking water for their workers; by using a sun-operated distilling plant with a large area of glassed-over wooden frames, they could evaporate the contaminated water, recondense it and produce up to 6,000 gallons (22,712 liters) of fresh water in a single day.

Solar stills can be useful when other water sources are unavailable, such as during power outages during a hurricane, in remote areas with a loss of electricity, or in the event of a wilderness emergency.

A simple solar still can be constructed by digging a hole in the ground, placing a container that can hold water in the middle, covering the hole with clear plastic sheet, and putting a pebble on the sheet directly over the container in the middle. The plastic will turn the damp hole into a makeshift greenhouse, trapping sun’s rays to produce heat. As the moisture within the hole evaporates, it will condense on the underside of the plastic and run down into the container.

This principle of using the sun to clean water has been applied on a more sophisticated scale using devices such as solar water purifiers. Australian scientist John Ward introduced a solar water purifying panel in 2006 that can convert contaminated water into safe drinking water. Water is plumbed into a specially designed panel, and as it passes though a series of cascading trays, the sun shines through the glass into the water. As heat is conducted into the water, it vaporizes and condenses on the underside surface of the glass and runs down into the purified water collection channel. The water is then heated and pasteurized, and additional exposure to the sun’s ultraviolet light completes the purification process.

An organization called Eawag: The Swiss Federal Institute of Aquatic Sciences and Technology, is spreading the word about the solar water disinfection method — known as SODIS for short — as a cost-effective solution for treating water and making it safe to drink in developing countries. And it’s simpler than you might think: Clear PET bottles (a commonly used food grade packaging plastic known for its chemical inertness) are filled with water and placed in the sun for six hours. The UV-A rays in sunlight kill germs such as viruses, bacteria and parasites. This process works even in lower temperatures.

A host of scientific studies have proven that the solar disinfection method kills germs in water effectively and that using the sun’s energy can even improve the health of the population by providing a source of clean, safe drinking water. This is no laughing matter: Nearly 1 billion people in developing countries live without access to clean water. Without a fresh water source, they must drink water that often leads to diseases such as typhus, dysentery, and cholera.