Food and shelter are crucial for living, but nobody can survive for very long without water. That’s why, since the beginning of history, civilizations have lived near abundant sources of H20. 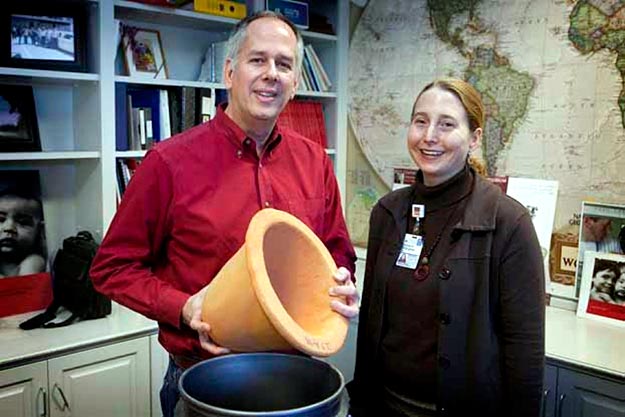 University of Virginia engineer Jim Smith and Dr. Rebecca Dillingham, co-directors of PureMadi, are shown with one of the ceramic water filters their company makes and distributes in South Africa for communities with little access to clean water.

But it’s not enough just to have plenty of it. The same water that gives life can also make people sick or even kill them, if it contains dangerous substances or disease-causing microbes. And since people use water for activities such as irrigating crops, washing and waste disposal, sources of water close to a human population can easily become contaminated.As a result, humans have been trying to purify water for thousands of years. As far back as 1500 B.C., Egyptians used the chemical alum to filter suspended sediment out of their drinking water. But it wasn’t until the late 1800s and early 1900s that scientists figured out that microbes caused illnesses and that water could be treated with chlorine or ozone to eliminate them.

While the water that comes out of taps in most countries now is clean and safe, about 11 percent of the world’s population — 783 million people — still doesn’t have access to potable water, according to a 2012 United Nations study. So scientists are developing new methods of obtaining water and purifying it. Here are 10 of the most promising technologies.