For a number of years now, we have heard of predictions that future wars will be fought over control of essential resources, such as water. To some extent, most wars have already been about that. However, in terms of water itself, some experts question this prediction. Inter Press Service (IPS) notes a number of experts disagree with the view that future wars will be over water, and instead feel it is mismanagement of water resources which is the issue, not scarcity (which is the underlying assumption for the prediction of such wars.) 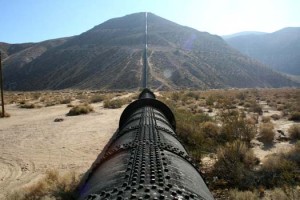 That same IPS article quotes Arunabha Ghosh, co-author of the United Nations Human Development Report 2006 themed on water management who says, “Water wars make good newspaper headlines but cooperation (agreements) don’t.… there are plenty of bilateral, multilateral and trans-boundary agreements for water-sharing—all or most of which do not make good newspaper copy.”

Others have noted that there are many more examples of cooperation than conflict in regions with shard water interests. The Stockholm International Water Institute opines that “10- to 20-year-old arguments about conflict over water are still being recycled.”

At the same time there have been various incidents that fuel the fear of water-related wars, such as Israel’s recent bombing of the Lebanese water pipelines from the Litani River to farmland along the coastal plain and parts of the Bekaa Valley, and the conflict in Sri Lanka where the rebel group diverted a canal.

Other examples that might be worth watching include the Panama canal as that country considers nationalizing it, the North West Passage through Canada’s northern polar region that is now opening up more due to climate change, which the US argues should be an international water way, and various others that may affect water dependency further up or downstream (e.g. between India/Pakistan, Israel/Jordan, various Nile-dependent countries throughout northern, eastern and central Africa).

The Stockholm International Water Institute also argues that “Such arguments [for water wars] ignore massive amounts of recent research which shows that water-scarce states that share a water body tend to find cooperative solutions rather than enter into violent conflict,” which may offer hope that conflicts do not arise, at least not due to water resources.