Tag Archive for Agriculture and Water

Humans depend on water in many ways, well beyond the few liters needed daily for drinking. Water is also essential for the production of food. Various forms of agriculture, practiced on about half of Earth’s land surface, provide the vast majority of food that over 6 billion people eat. Agriculture also provides much of the fiber for cotton, wool, and linen clothing.

One of the primary ways in which humans use water is by planting important crops in places where they can capture natural rainfall as rain-fed agriculture. Some forms of agriculture, such as intensive rice and corn production, can be practiced only in rainy climates. Such agricultural forms are much more productive than others, such as cattle and sheep herding, which are usually relegated to semiarid climates.

One of the primary reasons rain-dependent forms of agriculture are more productive than dry-land forms is that they have sufficient water to allow plants to grow to their maximum potential. Therefore, the most agriculturally productive regions of the world are all regions where natural rainfall is sufficient to allow rain-fed agriculture to flourish: 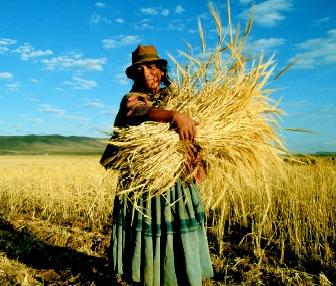 for example, the Subsistence agriculture on small farm plots is practiced in the highly elevated Altiplano of Chile and Bolivia (South America). Farmers in the arid highlands must cope with the variable weather conditions and extreme climatic uncertainty.  END_OF_DOCUMENT_TOKEN_TO_BE_REPLACED