American Inventor Presents an Answer to the World’s Water Crisis

Dean Kamen is not a new player in the innovator’s arena. He has been inventing and innovating ever since he dropped out of Worcester Polytechnic Institute in the 70’s. Since then, he invented such things as the insulin pump, a mobile dialysis system, and an all-terrain electric wheelchair called the iBot. His best-known invention is the Segway, a self-balancing, gyroscope-using, automatic-steering, scooter-like device that did not sell well in the U.S. but is expected to do better in Europe. 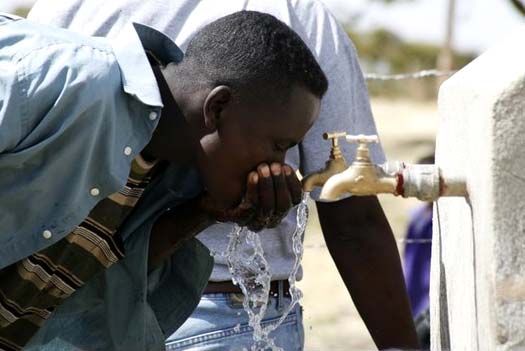 His newest invention could turn out to be world-changing. The term “revolutionary” comes to mind but may be too overused to express what this device could do for the world’s poor. It could save the lives of hundreds of millions of people in the third world. And it’s really quite simple. This invention answers the question — “How do you get drinkable water to the world’s thirsty?”

The Slingshot, A Revolutionary Water-Purifier

The invention, known as Slingshot, is basically a distiller. Distilling technology is not new. In fact, distillers have been around for decades. What makes this distiller unique is the low price and the large amount of water that can be produced. Other machines like the Slingshot can cost as much as $200,000 to $1 million. The Slingshot is expected to cost only $1,500. And it can filter 1,000 liters a day, using only 500 watts of electricity per hour. To put that into perspective, a toaster uses about 1,000 watts every time you make toast.

Possibly even more exciting than the cost-effectiveness and simplicity of the technology is its power. It can purify any source of moisture, whether ocean water, urine, or mud. And it does it all without filters, charcoal, or any other parts that must be replaced each time you use it.

The Slingshot has been slated for release within the next 12-18 months.

Saving Millions of Lives Every Year

“In the emerging world, in the under-developed world, a gallon of water is so precious that without it, you’re going to die,” says Kamen.

“In some places, the average amount of time per day spent looking for water that’s safe for their kids by women is four hours. And they carry this stuff, which weighs 62 pounds per cubic foot, four or five miles. And if it didn’t turn out to be the right stuff, or they put their hands in it and contaminated it, they spend the next day or two burying the babies.”

What will these women do with their extra 4 hours every day? How many families will be blessed by mothers who have the power to give water to their thirsty children? And with other inventions like the Merry-Go-Round power plant (see http://www.youtube.com/watch?v=uQu_…) , we may start to see our friends in the third-world finding a luxury that we have taken for granted for hundreds of years in the U.S. — fresh, drinkable water.