Experts Name the Top 19 Solutions to the Global Freshwater Crisis

This week we continue counting down the 19 best solutions to the global freshwater crisis captured by a GlobeScan and SustainAbility poll of more than 1200 leading international experts in 80 countries. Here’s the final list. 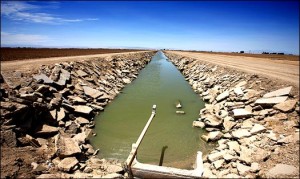 Photo by Brent Stirton/Reportage by Getty Images for Circle of Blue
Imperial Valley, California 2009: Runoff agricultural waste water contaminated with a high saline and
fertilizer content on its way to be dumped in the Salton Sea.

Virtually every industry in the world anticipates sweeping systemic transformation over the next decade in their strategic planning, production practices, and business models, according to the Sustainability Survey Poll on Water. The global opinion poll, which released a survey of more than 1,200 sustainability experts in March, concludes that water shortages will shift public perception of the value of water, prompting governments and companies to view clean water not as a commodity to exploit but as a precious resource.

Conducted by GlobeScan, an international public and stakeholder opinion research firm, and SustainAbility, a think tank and business strategy consultancy, the poll asked, “What are the technologies or changes in behavior which show the most promise for addressing water shortages over the next 10 years?” THE experts’ responses generated 19 consensus solutions.

Jeff Erikson, senior vice president at SustainAbility, told Circle of Blue that the decisions executives make to respond to freshwater scarcity will penetrate almost every aspect of their business operations. The varied solutions reveaedl the complexity of coping with water scarcity. Population growth, urban development, farm production and climate change are increasing competition for fresh water and producing shortages. Here’s a look at the first 10 areas where experts feel needed solutions will come.

1. Educate to change consumption and lifestyles
In the end, changing the face of this crisis involves education to motivate new behaviors. Coping with the coming era of water scarcity will require major overhaul of all forms of consumption, from individual use to the supply chains of major corporations, like GE. Some regions led by India, Australia and the Southwest U.S., are already facing the freshwater crisis. The most critical task is making sure the problem is much better understood worldwide.

3. Recycle wastewater
In March, World Water Day panelists urged a new mindset for wastewater treatment. Some countries, like Singapore, are trying to recycle to cut water imports and become more self-sufficient. The rich East Asian republic is a leader in developing advanced technology that cleanses wastewater for other uses, including drinking.

4. Improve irrigation and agricultural practices
Some 70 percent of the world’s freshwater is used for agriculture. Improving irrigation can help close supply and demand gaps. In certain cases profligate irrigation practices meant for an earlier era has weakened the ability of farmers to provide food and fiber to a growing world. Examples include the Murray-Darling basin in Australia, Central Asia’s Aral Sea, and the American Southwest. Although new technology has become an appealing solution, global water experts like Peter Gleick note that in some cases, such as the agricultural systems in California, success stories can happen by improving what’s already in place.

5. Appropriately price water
Water pricing and rights go hand in hand, with consumers questioning the benefit of higher prices. According to experts from the Organization for Economic Co-operation and Development (OECD), an international economic forum of 31 of the world’s richest countries, raising prices will help lower waste and pollution. But Circle of Blue’s May investigation into water pricing systems in major U.S. cities, show current utility pricing systems are obsolete, send the wrong signals, and need reform.

6. Develop energy efficient desalination plants
To date, desalination has been an energy-intensive solution to water scarcity. Typically the Middle East has capitalized on its large energy reserves to build desalination plants. But Saudi Arabia could be fostering a new kind of desalination with its recent announcement to use solar-powered plants.

Britain has taken a different approach with small-scale facilities for agriculture. But these innovations bring to light another needed resource—the capital for technological experimentation.

7. Improve water catchment and harvesting
Water catchment systems are essential for areas with no other reliable water sources. Pakistan and India—two countries that contend with some of the worst effects of climate change—are overhauling rainwater harvesting systems. These efforts provide independent control of water resources.

8. Look to community-based governance and partnerships
Community organizations elevate the experiences of those whose voices merit more influence. In April, for instance, indigenous groups met at the alternative climate change conference in Bolivia, a gathering meant to foster international partnerships among underrepresented groups. Ensuring more effective governance at the grassroots-level gives communities stature, and can lead to effective policy changes on a national scale.

9. Develop and enact better policies and regulations
As water scarcity complicates food security and pollution, governments need to redefine their role. The U.S. government is considering expanding the Clean Water Act to ensure more protections. In Russia, meanwhile, Prime Minister Vladimir Putin has approved waste discharges in Lake Baikal, one of the world’s largest bodies of freshwater. Regardless of what path elected leaders take–the Circle of Blue/GlobeScan WaterViews survey indicates they are considering multiple approaches–the survey also found that most people say it is up to the government to ensure communities have access to clean water.

10. Holistically manage ecosystems
Simply put, holistic management applies to a practical, common-sense approach to overseeing natural resources that takes into account economic, cultural, and ecological goals. In essence, the whole is greater than the sum of its parts, and each facet is related to and influences the others. Good examples of holistic management are communities that operate sewage treatment plants while pursuing partnerships with clean energy producers to use wastewater to fertilize algae and other biofuel crops. The crops, in turn, soak up nutrients and purify wastewater, significantly reducing pumping and treatment costs.

11. Improve distribution infrastructure
Poor infrastructure is devastating to health and the economy. It wastes resources, adds costs, diminishes the quality of life, and allows preventable water-borne diseases to spread among vulnerable populations, especially children. The problem is not confined to the developing world. Pipes burst on a regular basis in the U.S., prompting boil alerts. Sewage treatment systems regularly overflow and malfunction, causing beach closures.

12 Shrink corporate water footprints
Industrial water use accounts for approximately 22 percent of global consumption. The corporate footprint includes water that is directly and indirectly consumed when goods are produced. As sustainable manufacturing becomes more important, given the increasing severity of water scarcity, Peter Gleick and other experts question the costs of one industry sector in particular: bottled water.

13 Build international frameworks and institutional cooperation
Binding international accords for natural resource issues are hard to achieve. The 2009 United Nations Climate Change Conference in Copenhagen is evidence of that point. And that’s not just because the freshwater crisis, arguably the most visible and dire of the climate change risks, was ignored. Regional agreements regarding transboundary or shared water bodies such as the Great Lakes Compact in the U.S., and Nile River basin agreement in Africa are just as difficult to ratify. But policymakers and advocates need to keep trying. Humanitarian-oriented treaties, such as the U.N.’s drinking water Millennium Development Goals, indicate that comprehensive global strategies are possible.

14. Address pollution
Measuring and monitoring water quality is essential to human health and biodiversity. This monumental issue rears its head in many forms and can be addressed in just as many ways, whether it’s David de Rothschild’s eco-adventure in a plastic ship or Joe Berlinger’s documentary on oil contaminating the Ecuadorian Amazon. While securing the quality of drinking water and at the local level, it’s essential to build international bridges to solutions.

15. Public common resources / equitable access
One of the key United Nations’ Millennium Development Goals (MDGs) is ensuring access to drinking water. While the steps to achieve this goal are debated, the thesis that water is a basic right comes into play. As countries such as Chile attempt to reform water rights, U.S. politicians are considering how access rights translate into federal protection of Lake Michigan, one of the world’s largest reserves of freshwater.

16. R&D / Innovation
Access to water in a water-scarce world will become a much higher priority in business decisions. Communities are likely to pursue public-private partnerships that draw on the innovative capacities of companies. One example— cities that operate sewage treatment plants are likely to pursue partnerships with clean energy producers to fertilize algae and other biofuel crops with wastewater.

17. Water projects in developing countries / transfer of technology
Climate change and water scarcity are producing the most dramatic consequences in developing regions, such as northwest India and Sub-Saharan Africa. One proposed solution is to transfer water conservation technologies to these dry areas. Doing so is tricky because economies are weak and there are gaps in skills that often compel government and business authorities to impose these changes on local citizens.

18. Climate change mitigation
Climate change and water scarcity go hand-in-hand to cause some of the biggest contemporary challenges to the human race. These issues have a reciprocal relationship, identified by the Intergovernmental Panel on Climate Change (IPCC), in which, “water management policies and measures can have an influence on greenhouse gas (GHG) emissions.” As renewable energy options are pursued, the water consumption of these mitigation tactics must be considered in producing alternatives ranging from bio-energy crops to hydropower and solar power plants.

19. Population growth control
Because of the accelerating growth in global population, parts of the world could see a supply-demand gap of up to 65 percent in water resources by 2030. Currently, more than one billion people don’t have access to clean water. And with 70 percent of the world’s freshwater used for agriculture, water’s critical role in food production must be considered as climate and resource conditions change.