You may be familiar with how water is always cycling around, through, and above the Earth, continually changing from liquid water to water vapor to ice. One way to envision the water cycle is to follow a drop of water around as it moves on its way. I could really begin this story anywhere along the cycle, but I think the ocean is the best place to start, since that is where most of Earth’s water is. 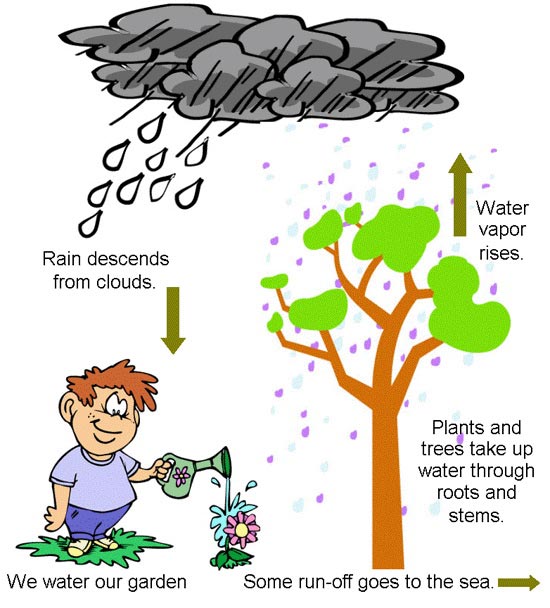 If the drop wanted to stay in the ocean then it shouldn’t have been sunbathing on the surface of the sea. The heat from the sun found the drop, warmed it, and evaporated it into water vapor. It rose (as tiny “dropettes”) into the air and continued rising until strong winds aloft grabbed it and took it hundreds of miles until it was over land. There, warm updrafts coming from the heated land surface took the dropettes (now water vapor) up even higher, where the air is quite cold.

When the vapor got cold it changed back into it a liquid (the process is condensation). If it was cold enough, it would have turned into tiny ice crystals, such as those that make up cirrus clouds. The vapor condenses on tiny particles of dust, smoke, and salt crystals to become part of a cloud.

After a while our drop combined with other drops to form a bigger drop and fell to the earth as precipitation. Earth’s gravity helped to pull it down to the surface. Once it starts falling there are many places for water drops to go. Maybe it would land on a leaf in a tree, in which case it would probably evaporate and begin its process of heading for the clouds again. If it misses a leaf there are still plenty of places to go.

The drop could land on a patch of dry dirt in a flat field. In this case it might sink into the ground to begin its journey down into an underground aquifer as groundwater. The drop will continue moving (mainly downhill) as groundwater, but the journey might end up taking tens of thousands of years until it finds its way back out of the ground. Then again, the drop could be pumped out of the ground via a water well and be sprayed on crops (where it will either evaporate, flow along the ground into a stream, or go back down into the ground). Or the well water containing the drop could end up in a baby’s drinking bottle or be sent to wash a car or a dog. From these places, it is back again either into the air, down sewers into rivers and eventually into the ocean, or back into the ground.

But our drop may be a land-lover. Plenty of precipitation ends up staying on the earth’s surface to become a component of surface water. If the drop lands in an urban area it might hit your house’s roof, go down the gutter and your driveway to the curb. If a dog or squirrel doesn’t lap it up it will run down the curb into a storm sewer and end up in a small creek. It is likely the creek will flow into a larger river and the drop will begin its journey back towards the ocean.

If no one interferes, the trip will be fast (speaking in “drop time”) back to the ocean, or at least to a lake where evaporation could again take over. But, with billions of people worldwide needing water for most everything, there is a good chance that our drop will get picked up and used before it gets back to the sea.

A lot of surface water is used for irrigation. Even more is used by power-production facilities to cool their electrical equipment. From there it might go into the cooling tower to be evaporated. Talk about a quick trip back into the atmosphere as water vapor — this is it. But maybe a town pumped the drop out of the river and into a water tank. From here the drop could go on to help wash your dishes, fight a fire, water the tomatoes, or (shudder) flush your toilet. Maybe the local steel mill will grab the drop, or it might end up at a fancy restaurant mopping the floor. The possibilities are endless — but it doesn’t matter to the drop, because eventually it will get back into the environment. From there it will again continue its cycle into and then out of the clouds, this time maybe to end up in the water glass of the President of the United States.