Uranium’s Mobility May Have Been Overestimated

Uranium contamination may move much slower in groundwater than previously believed, according to scientists at Pacific Northwest National Laboratory. Around the nation, sediments and groundwater are contaminated with uranium from discharges at mining and processing sites. 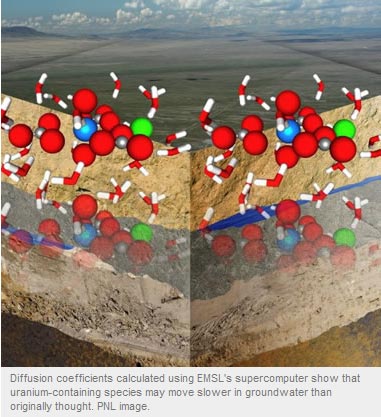 Knowing how uranium spreads out or diffuses in water is critical to predicting its movement and removing the contamination. But previous estimates may have significantly overestimated the radionuclide’s ability to move with the groundwater.

Why Knowing Uranium’s Speed is Important

With a better understanding of uranium diffusion at the molecular level, scientists can build more accurate models of uranium movement in groundwater. Being able to accurately predict how quickly uranium moves with groundwater will help regulators and other decision makers prioritize cleanup decisions. It will also allow engineers to design better cleanup approaches.

Traditional diffusion equations, such as the Stokes-Einstein equation, that are used to model chemical diffusion in groundwater were built at the macroscopic level and were based on spherical particles. These theories generally assume that the same equation applies in all situations, across chemical species.

Some Uranium Molecules Are Not Spherical

Uranium challenges these equations, because its many species can behave differently, and these species are far from spherical. Only at the molecular level, where particular species can be isolated, can scientists investigate uranium’s diffusion process.

A Study of Molecular Dynamics

The scientists were able to determine how water interacts with various uranium-containing species and the structure water adopts around the molecules, which affects diffusion rates. They then extracted the diffusion coefficients.

Speed is 40% Slower than Stokes-Einstein Predictions

Their results differed by as much as 40 percent from the Stokes-Einstein equation results, showing that uranium may move much slower in the groundwater than was originally thought.

What’s next? The researchers are plugging the molecular-scale information they’ve obtained into a pore-scale model. Adding the new information to the larger scale model will allow the scientists to investigate how their information influences uranium movement on a larger scale.