Facts and figures about estuaries

An estuary is a body of water partially surrounded by land, where fresh water from a river mixes with ocean water.

Estuaries may form under a number of circumstances: at drowned river mouths, within steep glacially eroded fjords, within barrier islands or a barrier spit parallel to the coast, or within coastal indentations formed by faulting or local subsidence. 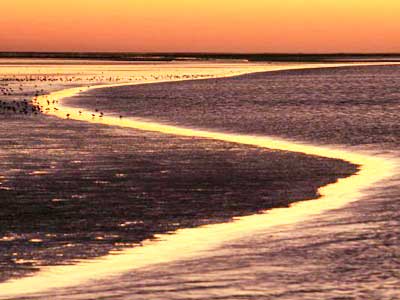 Tides define estuaries. Estuaries are washed either daily or twice daily with seawater. At high tide the salinity of the estuary will rise as sea water (20-35 parts per thousand of salt dissolved in the water) enters the estuary mixing with freshwater (0-0.5 parts per thousand) coming downstream. Estuary salinity can thus vary from 0-35 parts per thousand depending on the tide and amount of freshwater input.
The range of salinity means that animals living in estuaries must be capable of surviving in both high and low salinities. The meeting of seawater and freshwater means that a range of different temperatures, water levels, currents and levels of oxygen are also possible and must be tolerated for survival.

In general, primary productivity in estuaries is often extraordinarily high because of the availability of nutrients, the diversity of organisms, strong sunlight, protection from waves and the large number of niches created by the complex water circulation pattern.

Marine animals frequently use estuaries as nurseries, where the young take advantage of the abundant food during their first few weeks of life.

Some plants growing in shallow temperate estuaries have the ability to remove inorganic nitrogen compounds and metals from polluted waters running from the land, providing another essential ecosystem service for humans.

Overfishing, habitat clearing and increased pollution are the principal problems in the rapidly diminishing estuarine areas of the world.

Information from:
the UN Atlas of the Oceans