Water: The Measure of America

A subtle death-process played a godfather role in the conception and designing of the refrigerator, the vacuum cleaner, the automobile, and the turbine. Natural laws were stripped of wisdom and projected into matter. — Theodor Schwenk. 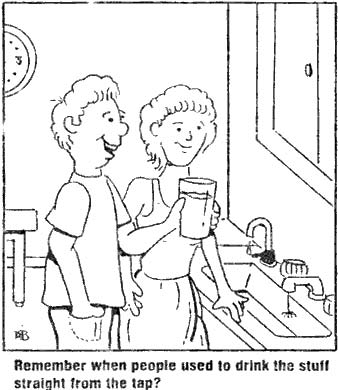 Thelma and Harold Grochocki (the couple in the cartoon, in case you didn’t recognize them) not only sprayed a heavy dose of some pretty deadly roachicides yesterday; they also fertilized, mowed, and watered their lawn, ate their fill of burgers, steak, bacon. and eggs, drove their van 63 miles, poured half a can of paint thinner and a jar of pickle juice down the drain, watched TV most of the afternoon, washed their clothes, their dishes, and their dog, bathed, perfumed, and deodorized their bodies, vacuumed the carpet, and urinated and defecated repeatedly. It is interesting that although they spent most of their day at activities that directly or indirectly contaminate water, they seem surprised that the stuff that flows on demand from the kitchen tap isn’t pristine mountain spring water.

Water is our most obvious and unfailing tangible example of the universal moral principle that says we reap what we sow. Sooner or later, our sins against water return to our doorstep. And just as Ghandi said that a people’s moral progress can be gauged by the way its animals are treated, so also are a nation’s values mirrored in the condition of its waters. It took many decades of misuse and exploitation to produce the chemical soup that Harold and Thelma drink.

Our abuse of water goes back at least to Columbus. The famous discovery voyage set in motion a violent orgy of exploitation that is now approaching its maturity. The real deeds of the early raiding parties were touched on very lightly in the rosy versions of the discovery that we heard in grade school. Violence against man and nature abounded. Bartolomé de las Casas, who arrived in the New World just ten years after Columbus’ landing and later became a priest and champion of the Indians in Mexico, wrote descriptions of “such inhumanities and barbarisms . . .as no age can parallel.” Father Las Casas saw the Spaniards dismember, rape, or behead 3,000 natives in a single day. He described nursing infants used for dog food, children with their legs cut off, people poured full of boiling soap.

Historian Barry Lopez comments on the legacy of the Spaniards: “We lost whole communities of people, plants, and animals, because a handful of men wanted gold and silver, title to land, the privileges of aristocracy, slaves, stables of little boys. We lost languages, epistemologies, books, ceremonies, systems of logic and metaphysics–a long, hideous carnage” (The Amicus Journal, Fall 1991). More significantly, Lopez finds that the seeds of early violence and exploitation bore fruit in some of the basic assumptions that we Americans have been taught to live by: that one is due wealth in North America, that we have a right, conferred by God and sanctioned by the state, to make use of whatever we need in the pursuit of wealth and happiness.

The belief in our God-given right to exploit can be traced, Lopez says, through the journals of the people on the Oregon Trail and the speeches of American industrialists; it can be observed in “the acid-burned forests of New Hampshire, the cauterized soils of Iowa, and the collapse of the San Joaquin Valley in caverns emptied of their fossil waters.” He finds everywhere evidence of “a profound abuse of the place during the course of centuries of demand for material wealth.”

Although we “average Americans” may think of ourselves as gentle folks, we are active participants in a cruel and unprecedented pillaging of the world that sustains us. We do not reflect that our unbridled consumerism is no accident. We are programmed to consume by schools, media, and tradition. Even the politicians we elect take on the role of detail men, sales reps for big business, today hawking drugs, tomorrow automobiles. In the days of bustling economic growth after World War II, an American retailing expert named Victor Lebow proclaimed:

“Our enormously productive economy demands that we make consumption our way of life, that we convert the buying and use of goods into rituals, that we seek our spiritual satisfaction, our ego satisfaction, in consumption. We need things consumed, burned up, worn out, replaced, and discarded at an ever-increasing rate.”