Facts and figures about acid rain

Acid rain occurs when sulphur dioxide and nitrogen oxides are emitted into the atmosphere, undergo chemical transformations and are absorbed by water droplets in clouds. The droplets then fall to earth as rain, snow, or sleet. 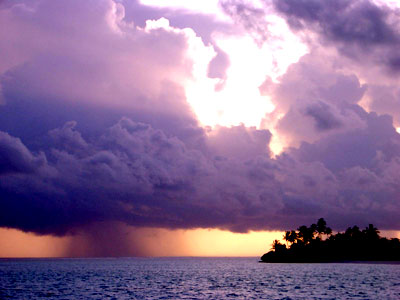 The major causes of acid rain are the sulphur dioxide and nitrogen oxides produced when fossil fuels such as coal, oil and gas are burned and sulphur dioxide and nitrogen oxides are released into the atmosphere where they can be absorbed by the moisture and become weak sulphuric and nitric acids, sometimes with a pH of around 3.
Acid rain and its frozen equivalents, acid snow and acid sleet, are part of a larger problem called acid deposition. Acid deposition also includes direct deposition, in which acidic fog or cloud is in direct contact with the ground; and dry deposition, in which ions become attached to dust particles and fall to the ground.

Pure water has a pH of 7 (neutral), while normal rain has a pH of about 5.6. It is slightly acidic because naturally present carbon dioxide from the Earth’s atmosphere dissolves in the rain drops to form carbonic acid. A change in the pH scale of one unit reflects a tenfold change in the concentration of acidity. Generally rain with a pH value of less than 5.3 is considered to be acid rain.

Water courses and lakes are affected by acid rain which falls directly into them and from water which runs into them. The problem is worst in the spring, when the snow melts. The pollution accumulated over the winter period is suddenly released as an ‘acid surge’ just at the time when many young fish and insects are most vulnerable.

A healthy lake has a pH of about 6.5 and supports a rich variety of wildlife. As a lake becomes more acidified, the fish population declines and the birds, which feed on the fish, also decline. For a while there is usually an increase in the number of insects in the lake as they are not eaten by fish. However, as the acidity increases, the number of species found declines. The lake becomes ‘dead’ when the pH reaches about 4.5.

Asia is currently the region most affected by acidification; in China wide-spread burning of high-sulfur coal in small stoves and industrial burners has contributed to a serious air quality problem. Southwestern China is particularly affected, with damage to forests and crops from acidic conditions.

Acid rain has broad transboundary implications as it can get carried over long distances from polluting areas to other countries. For example, Japan is impacted by Korean and Chinese emissions, while Canada, in addition to its own sources, receives substantive emissions from the United States of America.