‘Virtual Water’ – A New Way to Look at Climate Impacts

While international trade results in carbon emissions thanks to the fossil fuels burned by planes, trucks and ships, a Princeton University research team has found that world trade could also mean more efficient water use as a side benefit. And since water is a key resource in the production of climate-friendly energy sources, including hydroelectric and nuclear power, that could at least partially offset trade’s negative impact.

Focusing on agriculture, which accounts for 80 percent of freshwater consumption worldwide, the researchers examined trade through the lens of what they call “virtual water” — a measure of how much water goes into the production of a bushel or a kilogram of a given crop. “It’s like the carbon footprint concept, but for water,” Princeton civil and environmental engineering graduate student Carole Dalin, lead author of a paper on the topic in Proceedings of the National Academy of Sciences, said in an interview. 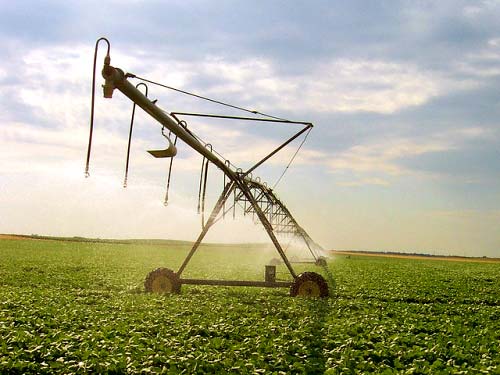 According to Dalin and her colleagues, it turns out that nations with inadequate water resources also have lower crop yields per acre. In these places, in other words, it takes more water to produce the same amount of corn or soy or barley. Food exported from water-rich areas to water-poor areas, therefore, amounts to a transfer not just of food, but of water efficiency. Overall, Princeton civil and environmental engineering professor Ignacio Rodríguez-Iturbe said, “This lowers the average water footprint of the whole world population.”

In order to carry out their research, the team focused on the trade of 58 food commodities made from barley, corn, rice, soy, and wheat, as well as three livestock products, and used virtual water content simulations to quantify how much water went into producing a unit of a commodity in different countries. The virtual water footprint is a relatively new concept, according to Dalin, but one that is quickly catching on in scientific conversation.

The biggest players in the trade of virtual water have been the U.S. and China, the study noted. The U.S. was the biggest virtual water exporter for most of the 22-year research period, while China replaced Japan as the leading virtual water importer in 2001. Together, the two countries accounted for 35 percent of the world’s virtual water trade volume in 2007. Rodríguez-Iturbe attributes China’s higher virtual water imports to the country’s growing GDP and the resulting spike in meat consumption and thus demand for animal feed such as soy.

When a new domestic trade policy opened the option of soybean meal imports into China in 2000-2001, soy from the U.S., Brazil, and Argentina began flowing into the country. Because these three countries are able to use less water in soy production than China, their soy exports to China contributed to 96 percent of soy-associated water savings in 2007.

Like most things, the virtual water trade boom is not without its drawbacks. If water-poor countries rely on food imports from the water-rich, they may have less incentive to manage their own water resources, according to Rodríguez-Iturbe, and rising demand for Brazil’s soybean products has meant more deforestation of the Amazon rainforests to make way for soybean plantations.

But the international food trade could also be a refuge for countries whose food production is hampered by drought or unfavorable weather patterns — the very changes that are likely to accompany climate change.