In Depth: Desert skyscrapers could be a wind ‘game-changer’

Construction of two sky-scraping wind-driven “downdraft towers” that could eventually supply electricity to more than three million homes is on track to start in 2014, after Clean Wind Energy (CWE) was given the green light to proceed with the 5GW mega-project.

“The concept has been around for 30 years — but how to build a tower of the size needed is the thing” – Ron Pickett. 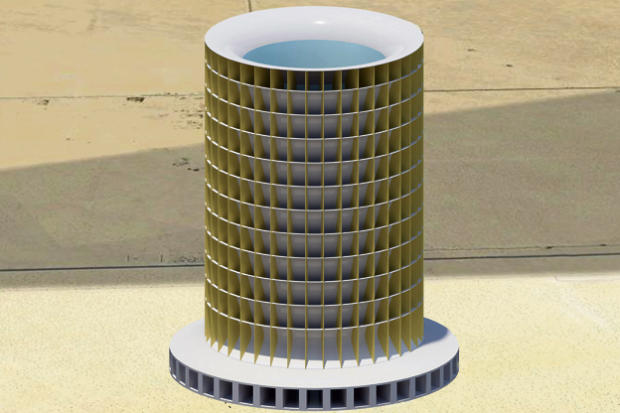 The US company’s revolutionary power-station concept, to be built on a 6,880-hectare site near San Luis, southwest Arizona, is based on what would be the world’s tallest man-made structure — a 914-metre hollow tower — outfitted with a water-spray system.

It is able to generate 2.5GW from a high-speed stream of “downbursts” of air within the tower to turn an array of turbines in the foundation.

The downdraft tower concept is not new — it was hatched in the 1980s by US inventor Phillip Carlson and has been developed by researchers including the Israel Institute of Technology’s Dan Zaslavsky and Rami Guetta. But finding a way of working the economics to build the soaring structures, costed at $4bn apiece, will be a first.

“The key to these towers is the construction technique,” says CWE chief executive Ron Pickett. “When you delve into the physics of the concept, there is no question that by building one of these towers you can harness the downdraft you get by mixing water and hot air [at altitude] — the concept has been around for 30 years — but how to build a tower of the size needed is the thing.”

The sheer scale of the downdraft towers has called for a radical approach to construction involving an industrial on-site assembly facility, freight elevators and ten mobile cranes.

The approach has been devised through a two-year collaboration with Denmark’s Krøll Cranes. The bottom 130 metres of the 396-metre-wide structure will be built “in a conventional manner”. From there, a heavy-lift crane will hoist smaller 92metre-boom cranes up onto the 15-metre-thick walls to begin erecting a tubular space-frame and the 75,000 steel modules that make up the outer structure.

“The size of the cranes, the boom lengths, the speed of the elevators bringing equipment and parts up to the cranes — all of this had to be factored in,” says Pickett, noting that the structural design of the walls “will have more to do with supporting the crane work than wind loads”.

Building each downdraft power station is expected to take up to three years: one year for the earthworks and foundation; another to build the tower, with the crane operators living full-time in “apartments” within the cabin; and one year to install the piping, electricals, turbines and generators.

The first tower will rely solely on downdrafting wind for its energy, but CWE’s vision for a future version would feature external “wind vanes” to capture wind resource at elevations of 245-914 metres.

“Once the first tower is performing and we have all the relevant data, then we will consider whether the next one will have wind vanes,” says Pickett. “Downdrafting is a predictable resource: we have the historical meteorological data, so we can very accurately forecast the weather and adjust the water output to determine our power production.”

Desalinated water for the spray system is to be transported about 110km by pipeline from Mexico’s Gulf Of California for circulation through a network of pipes.

In operation, the “created wind” will rush down the tower into an arrangement of 52 tunnels that resembles an “old-style orange-juicer”. These tunnels channel the air flow into sets of four in-line hydraulically driven generators. CWE calculates that this arrangement should harness about 90% of the incoming wind flow.

“Wind travels at variable speeds, even when you are making it yourself, so we have opted for hydraulic pumps and a hydraulic pressure system to spin our generators at a rate of 1,800 revolutions per minute,” says Pickett.

CWE estimates it will be able to produce electricity from its downdraft tower at $0.05 per kW.

The company is running the rule over construction of a similar-scale project in Mexico, but its long-distance ambitions range into India, the Middle East and Africa.

“Our model to help power Europe would involve three to four towers in North Africa making direct current and taking it straight across the Mediterranean Sea into the European grid and converting it back [to alternating current] for distribution,” says Pickett.

With development approval from San Luis City Council, CWE can begin its environmental impact assessment, as well as discussions with engineering contractors and regional utilities.

The downdraft tower can be operated “with virtually no carbon footprint, fuel consumption or waste production”, says Pickett.

“This technology is a game-changer. It won’t work everywhere in the world, but where it does, it will change the way power is thought of.”