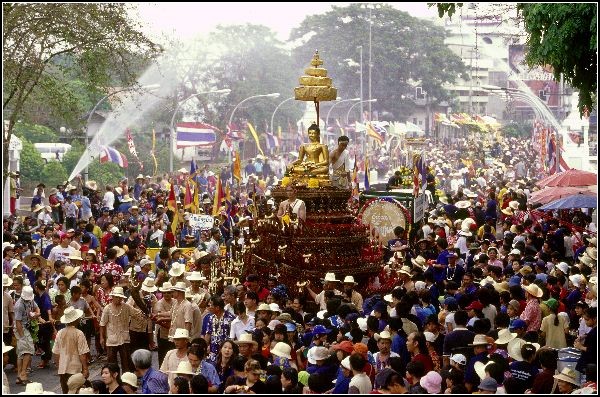 While Thais are always up for a good celebration, and certainly celebrate the western and the Chinese New Years with gusto, the most popular and important celebration in the Thai calendar is the Songkran Festival – the traditional Thai New Year. Previously calculated astrologically, the Songkran Festival is now fixed on the 13th to the 15th of April. It’s not unusual for Thais to take their holiday time from work during this week, and all of Thailand shuts down for at least 13 – 15 April.

Presumably because it represents cleansing for the new year, but perhaps also because mid-April is the hottest part of the year in Thailand, one of the most popular ways to celebrate the New Year is to throw water. Roaming the streets with water guns, or standing at the corner of their home with a garden hose, Thais take great delight in drenching whoever they see. 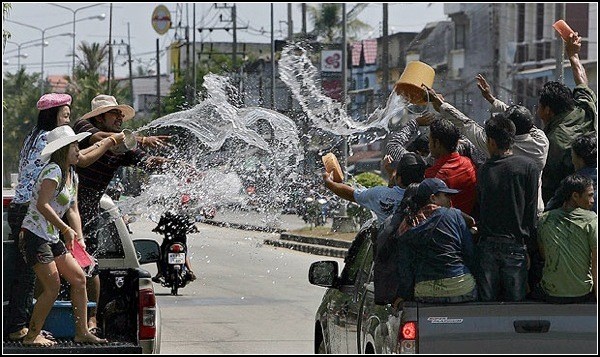 Even elephants sometimes get in on the action, with riders encouraging them to use their trunks to spray whole carloads of passerbys. Although this didn’t used to be the main part of the Songkran celebration, water guns and hoses have made it easier for this jolly tradition to take a more central role in recent decades.

Although Songkhran is a time filled with good cheer, it’s also a time for devout Buddhist Thais to cleanse their negative karma for the past year, and create auspicious karma for the upcoming year. Many Thais will visit a wat (Buddhist monastery) in order to pray and make offerings to the monks. Pictures and statues of Buddha are cleaned by gently pouring perfumed water on them. Meanwhile, combining the good fun of throwing water with sacred Buddha images, Buddhas from important wats are marched down the streets, and onlookers douse them with water – thus ritually cleansing them. 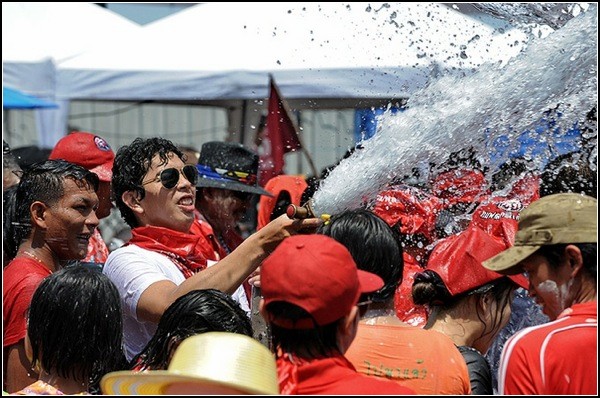 In fact, it is this tradition of bathing Buddhas that kicked off the more recent tradition of soaking friends, family, and strangers with water. In the past, the water that ran off the cleansed Buddhas was reclaimed and poured onto people for auspiciousness, not unlike the use of water in a Christian baptism. But the fun-loving Thai people gradually transformed this tradition into spirited water throwing and water fights everywhere in Thailand. Though traditionalists don’t like it, it seems that the water fights are here to stay.

Other Songkran Festival Activities and Traditions

Parts of the Songran Festival, even besides the water fights, might remind westerners of April Fool’s Day. Young ladies like to play pranks on the young men, and they do their best to work together to capture the young men and then cover them with blacking. 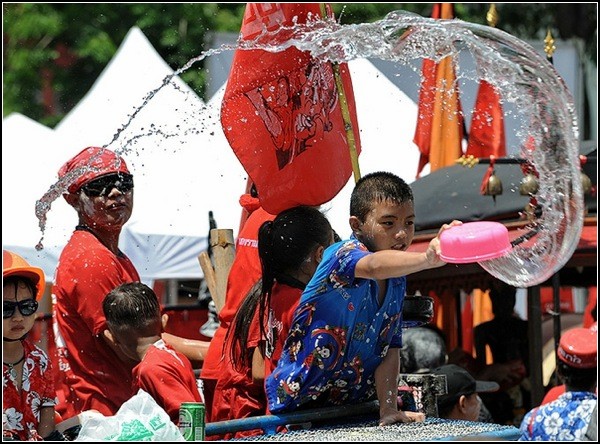 On the 12th of April, everyone cleans out their homes, burning all the rubbish. The government highly approves of this national day of sanitation, and it helps that the Thais engage in this practice naturally, thanks to tradition. On the morning of 13 April, everyone makes their way to the nearest wat. Offering food to the monks, the monks have a great feast to the accompaniment of music. Later in the day is the ritual bathing ceremony of the Buddha images as already described, and then the water throwing begins.

Thais also dutifully perform the religious ceremony of Bangsakun during the Songkran Festival, a ceremony to honour the dead. Most Thais are cremated, with their ashes buried at the foot of a sacred fig tree in the local wat. Monks officiate as everyone remembers their dead relatives.

Songkran is a festival hugely enjoyed by young and old, Thais and westerners. If you are planning a trip to Thailand, scheduling a trip around the Songkran Festival is a great idea. You’ll get to know Thai culture, enjoy the fun-loving celebrations, and you’ll probably get soaked with a few water guns.