Facts and figures about water and agriculture

Out of the world’s total land area of 13 billion hectares (ha), 12% is cultivated, and an estimated 27% is used for pasture. The 1.5 billion ha of cropland include 277 million ha of irrigated land, representing 18% of cropland. 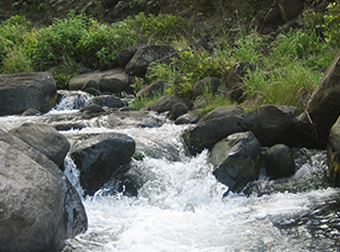 In population terms, cropland amounts to a global average of 0.25 ha per person.

To satisfy the growing demand for food between 2000 and 2030, production of food crops in developing countries is projected to increase by 67%. At the same time, a continuing rise in productivity should make it possible to restrain the increase in water use for agriculture to about 14%.
Producing food requires from 2,000 to 5,000 litres/person/day, depending on diet and climate differences and the efficiency of local food production systems.

Most of the water used to produce food or other crops comes from rain that is stored in the soil (so-called green water), where it is captured by crop roots. Irrigation is practised in places and times where rainwater is insufficient for adequately supplying water to crops.

In 2030, irrigated agriculture in 93 developing countries would account for over 70% of the projected increase in cereal production. In these countries, the area equipped for irrigation is expected to expand by 20% (40 million ha) between 1998 and 2030.