In a new article, science writer Stephen Ornes explains how pond skaters effortlessly skip across water leaving nothing but a small ripple in their wake.

As Ornes writes, our current understanding of the mechanisms adopted by the pond skater is down to the efforts of David Hu, who as a mathematics graduate from the Massachusetts Institute of Technology spent four years studying their behaviour. 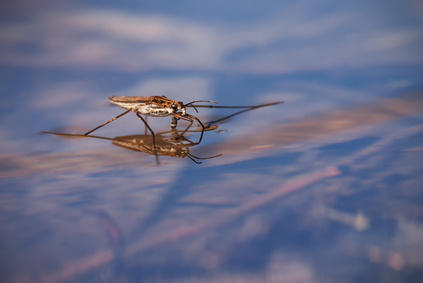 In a new article, science writer Stephen Ornes explains how pond skaters effortlessly skip across water leaving nothing but a small ripple in their wake.

Hu, along with his PhD supervisor John Bush, found that pond skaters use the middle of their three pairs of legs to “row” across the water. When a rowing boat’s oar slices the water, it creates swirling vortices just beneath the surface that twist away from the boat and move it forwards — the same vortices are created by tiny hairs that cover the pond skater’s legs.The hairs are the only part of the insect’s body that penetrate the water and are covered in a waxy substance that keeps water out by allowing bubbles to attach to them. The hairs have subsequently drawn the attention of materials scientists looking for a permanent waterproofing material that doesn’t wash off.

The pond skater (also known as the water strider) is one of a tiny proportion of insects — around 0.1 per cent — that are able to stand and move on water. They stay afloat thanks to their small weight and the surface tension of water acting like a skin; however, according to Newton’s third law of motion, the pond skater must push against something to move forward, which is fairly tricky when the only thing available is water.

Previous theories had suggested that pond skaters created tiny ripples — known as “capillary waves” — with their legs which subsequently propelled them across water, but as biologist Mark Denny pointed out in 1993, this couldn’t be the case as infant pond skaters cannot move their legs faster than the phase speed of the capillary waves — a feat necessary to create them.

Hu and Bush came to their conclusions by filming a group of pond skaters using high-speed cameras as they moved across a body of water filled with colourful floating particles — this helped identify the swirling vortices that were being created.