The Water We Drink 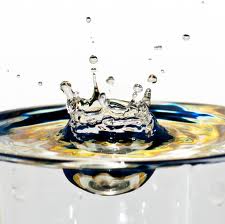 Thousands have lived without love, not one without water.
W. H. Auden.

Ye nymphs that reign o’er sewers and sinks,
The river Rhine, it is well known,
Doth wash your city of Cologne.
But tell me nymphs, what power divine
Shall henceforth wash the river Rhine?
Samuel Taylor Coleridge.

Probably you have decided from the above that I am a member of the Flat Earth Society and a nonbeliever in the microworld. Not so. In fact, I read with open-mouthed wonder of the doings of positrons, quarks, and neutrinos and I stand amazed at the diversity of creation. Under every gnat’s armpit there remain a billion universes to be discovered. There’s nothing new about this. An 18th century poet stated it eloquently:

On every flea, there’s a flea to bite him,
So on and on, ad infinitum.

Appreciation for the rich microworld teeming with life does not require, however, that one profess faith in the gospel preached by today’s pseudo-science establishment any more than belief in God requires belief in Jimmy Swaggart. In other Gazette articles I have frequently confessed that I do not worship at Robert Gallo’s altar.As it is practiced today, Science, our national religion, is largely a light show designed to fan the flames of consumerism by promoting half-truths and superstitions. It has many branches, or “denominations,” if you prefer. Conventional “health care,” the great disease promotions, university nutrition programs, the war industries, the legitimized drug trade (pharmaceuticals), most university “research,” chemical agriculture, etc.–all these branches of the Church of Science deserve the same credibility rating as television evangelism. Government and Science are fast bedfellows, a fact that makes all our posturing about “separation of Church and State” a mockery. While we fret about such non-issues as prayer in the schools and the teaching of evolution, schools, with the blessing of all, spew forth a steady dogma of junk-science slogans and demand of their novices participation in such rituals and superstitions as vaccination and animal sacrifice.

One superstition that is used to create the illusion that our public water supplies are nestled safely in the hands of God is the famous MCL, a magic number overseen and nurtured by the EPA, that is supposed to represent the maximum level of a given contaminant that can be safely consumed by a human. The MCL list includes a handful of the known water contaminants and is growing at a pace hundreds of times slower than new chemical contaminants are being created. By and large, the MCL list is a politically negotiated set of mythical numbers that have no more relevance to our lives than the daily baseball scores. No one–not your doctor, the research scientist, or the EPA–really has the faintest notion of how many thousandths of a milligram per liter of water of CIS-1,2 Dichloroethylene a human can “safely” ingest. As of July 1992, the Oracle said it was 0.07 mg/L, but additional animal sacrifices and changes in the political climate are sure to alter the figure.

The pseudo-science dogma of the “kingdom of dead laws” is especially apparent in the method we have adopted to judge water quality. Just as our medical system defines health as absence of definable illness, we are trained to esteem water only to the degree to which it does not contain contaminants–especially those for which the EPA has established an MCL. This allows us to define as pure some pretty insipid water just because it has been well scalded with Clorox and doesn’t happen to be holding a big hit of asbestos or chlorobenzene on the day the annual or semi-annual testing ritual is performed.

Since water is our most essential nutrient, the fallacy of defining its quality only in terms of the absence of known and measurable poisons should be obvious. The workings of its positive, life-sustaining properties are largely a mystery to us. We have not begun to explain how water works its wonders.

Theodor Schwenk has written at length on the distinction between hygienically acceptable water that “meets standards” and water which is truly healthful for the Earth and its inhabitants alike. This water he calls “living water.” Schwenk defines living water in terms of its movement patterns, its rhythm, and the balance of its components, many of which, he insists, we are unable to perceive or measure. Living water, he says. “is water that contains not only the cosmic elements radiating life into the earth sphere, but that also has an inherent relationship to man as body, soul, and spirit.” It is, he says, “water that maintains itself in active balance.” 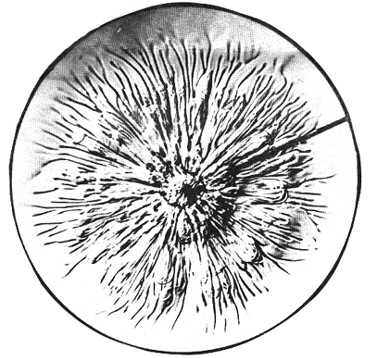 This object is not a newt’s eyeball, as some have suggested, but rather a drop of water photographed with a special technique developed by Thoedor Schwenk. Read on for details.

can span just as broad a spectrum of types of motion as do surface waters ranging from refreshing springs to brooks freshly laden with domestic and commercial waste water.”

Several of Schwenk’s drop pictures are reproduced in the very significant book, Water: The Element of Life, published by the Anthroposophic Press. Schwenk’s drop pictures are not intended to replace but to complement the current hygienic standards by which we measure water quality. Certainly there are many factors affecting water quality which cannot be detected by laboratory methods. As a single example, I’ll cite my belief that through our custom of imprisoning water in tanks, bottles, pipes, and dams we do grievous damage to water and to ourselves. We do this without thought, because we have conditioned ourselves to see water as a commodity rather than in its true nature as a living entity.

Schwenk says that “when water comes to a resting state of balance, it stagnates, loses its ‘life,’ is as though paralyzed.” Visionaries like Schwenk and poets like Federico Garcia Lorca, whose works are filled with stark images of imprisoned water that in human terms portend spiritual, sexual, and creative stagnation, may be hundreds of years ahead of science in understanding water. Damming a river, like applying a tourniquet to an artery, has far-reaching implications, and ingesting water that has been held captive in bottles and pipes may have health consequences not yet imagined. If, as many believe, the anguish of murdered animals is passed on to those who eat their adrenaline-laden flesh, so also might the agony of imprisoned water take its toll on those who drink it.