Distillation – How does it work?

Distillation is a water purification process that uses a heat source to vaporize water and separate it from contaminants and other undesirable elements commonly found in ground and surface water. 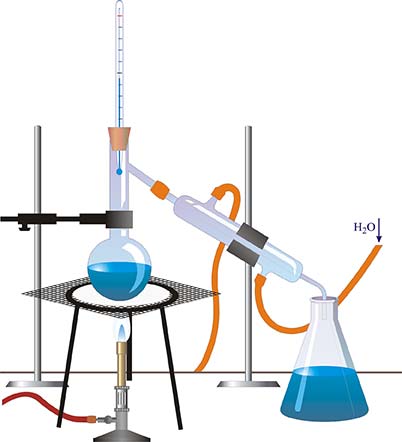 Distillation heats raw (untreated) water until the water reaches its boiling point and begins to vaporize. The heat is then kept at a constant temperature to maintain water vaporization while prohibiting other undesirable elements from vaporizing. Water has a lower boiling point than salt and other mineral sediments.

This process also separates the water molecules from microscopic, disease-causing organisms. Once all of the water has vaporized, the vapor is led into a condenser, where, upon cooling, the water reverts to the liquid form and runs into a receiving container. The remaining elements, whose boiling point was too high to permit vaporization, remain in the original container and constitute the sediment (Holland, Siqueiros, Santoyo, Heard, & Santoyo, 1999).

Because the distillation process can never ensure a complete separation between water and other materials, it is often repeated one or more times with the treated water. Many alcoholic beverages, like brandy, gin, and whiskey, are distilled, using an apparatus similar in constitution to the water distillation apparatus.