Scientists from the California Institute of Technology (Caltech) have come up with a way to convert water into fuel using sunlight and an oxide of a naturally-occurring rare earth metal. Professor Sossina Haile and her team from Caltech were able to utilize cerium oxide to act as a renewable and inexpensive catalyst, effectively converting water or carbon dioxide into hydrogen or carbon monoxide. 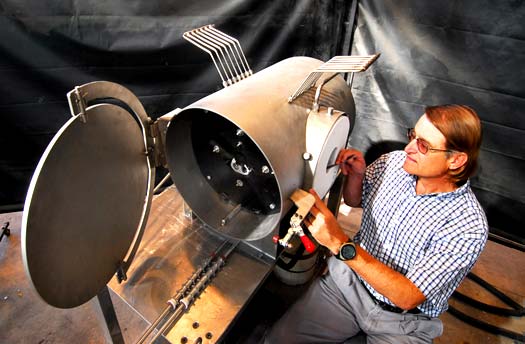 Published in the journal Science, the report on the new fuel device explains that it uses cerium oxide to strip oxygen out of water and essentially convert it into a usable, liquid fuel. This is accomplished by heating water to over 1,600 degrees Celsius, or over 2,900 degrees Fahrenheit, in the presence of the catalyst. And the conversion process does not deplete the cerium oxide, so the metal can be reused hundreds of times without being damaged.

“There is nothing cost prohibitive in our set-up,” explained Haile to U.K. Guardian. “And there is plenty of cerium for this technology to make a major contribution to global gasoline supplies.”

In its current stage of development, the team says a rooftop version of the device can produce roughly three gallons of fuel a day, which can be used to power vehicles or even generate reserves of solar energy to help offset home utility costs.

An earlier study on solar-to-fuel technology published in the journal Solar Energy in 2006 found the same effect when applying cerium oxide and heat to water. Scientists observed that the process produced pure hydrogen readily available for use directly in hydrogen fuel cells.

Other research involving the use of sunlight to produce liquid fuel has been undertaken by researchers at the Massachusetts Institute of Technology (MIT), at the Lawrence Berkeley National Laboratory and at Imperial College in London.