A new study using data from NASA satellite missions finds that, although the long-term water picture for the Aral Sea watershed in Central Asia remains bleak, short-term prospects are better than previously thought. 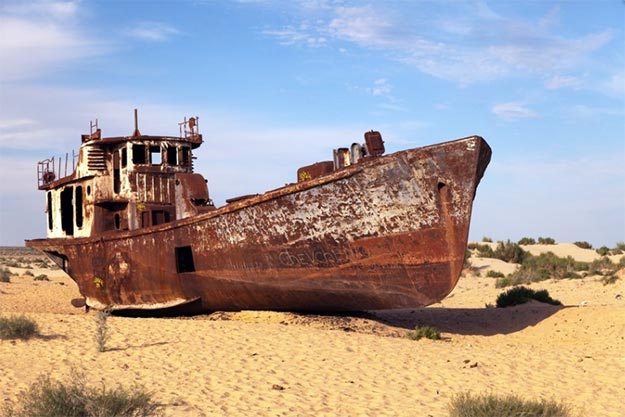 Once the fourth largest inland sea in the world, the Aral Sea has lost 90 percent of its water volume over the last 50 years. Its watershed — the enormous closed basin around the sea — encompasses Uzbekistan and parts of Tajikistan, Turkmenistan, Kyrgyzstan and Kazakhstan.

Graduate student Kirk Zmijewski and assistant professor Richard Becker of the University of Toledo, Ohio, wanted to find out whether all of the water was gone for good, or whether some of it might have ended up elsewhere in the watershed, behind dams or in aquifers. They also wanted to gauge whether decreasing rainfall has contributed to the catastrophic water loss.

The researchers used data from NASA’s Gravity Recovery and Climate Experiment (GRACE) satellites to map monthly changes in mass within the watershed from 2003 to 2012. These changes are associated with changes in water volume, both on and below the land surface. They mapped the entire Aral Sea watershed, which is more than twice the size of Texas at 580,000 square miles (1.5 million square kilometers).

Zmijewski and Becker found that each year throughout the decade, the watershed lost an average of 2.9 to 3.4 cubic miles (12 to 14 cubic kilometers) of water, or the equivalent of one Lake Mead per year. That’s a sobering rate of loss, but it’s only about half as much as the rate at which the Aral Sea itself is losing water (5.8 cubic miles or 24 cubic kilometers).

“That means that roughly half the water lost from the Aral Sea has entirely left the watershed, by evaporation or agricultural uses, but half is upstream within the watershed,” said Becker.

Specifically, more water is now in the central part of the watershed, where almost all of the region’s farming takes place. That area increased in mass during the last four years of the study. The researchers believe that some of the increase comes from improvements in water conservation practices, though some was simply the result of inefficient irrigation, for example, water seeping out of unlined ditches into aquifers.

Decreasing rainfall in the region has been widely reported, and the researchers wanted to quantify its role in the water loss. They were unable to find a complete and reliable published rainfall record for the entire watershed using ground-based measurements, so they analyzed rainfall data from NASA’s Tropical Rainfall Measuring Mission satellite. Unexpectedly, they found no change in precipitation since 2002. “That was more surprising to us than anything else,” said Becker. To check that result, they extended their analysis back to 1980, using data from the Global Precipitation Climatology Project for the earlier years. There was no sign of dwindling precipitation for the watershed across the entire 30-year period.

Patterns of rainfall have shifted near the Aral Sea, Becker pointed out, and that may have misled observers into believing that rain was decreasing overall. “Lake-effect precipitation downwind of the Aral Sea has decreased, but precipitation over the sea itself has increased, so that’s not changing the whole system,” he said.

The basin’s water woes began in the 1930s with a Soviet development plan to create a cotton industry in the Central Asian desert. Rivers flowing into the Aral Sea were diverted to nourish the thirsty crop, setting off the inland sea’s decline. Since the breakup of the Soviet Union, several watershed countries have maintained a cotton-based economy.

Declining availability of freshwater due to human activities and climate change is a critical issue throughout the world, affecting agriculture, economics and politics. Becker said, “When water is removed from the watershed, agricultural prospects in the region decline. It’s hopeful that investments in irrigation upgrades have decreased water losses. With savvy water policy, each country in the watershed could continue to improve in the future.”

NASA monitors Earth’s vital signs from land, air and space with a fleet of satellites and ambitious airborne and ground-based observation campaigns. NASA develops new ways to observe and study Earth’s interconnected natural systems with long-term data records and computer analysis tools to better see how our planet is changing. The agency shares this unique knowledge with the global community and works with institutions in the United States and around the world that contribute to understanding and protecting our home planet.