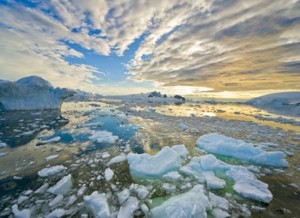 A new NASA study has revealed why Antarctic sea grows as Arctic sea ice melts. According to a Jet Propulsion Laboratory (JPL) report, NASA and British Antarctic Survey researchers have announced the first direct evidence that obvious changes to Antarctic sea ice drift caused by changing winds are responsible for observed increases in Antarctic sea ice cover in the past twenty years.

Researchers looked at maps generated by the JPL from more than five million individual daily ice-motion measurements. The data reveals long-term changes in sea ice drift around Antarctica.“Until now, these changes in ice drift were only speculated upon, using computer models of Antarctic winds,” said lead author Paul Holland of the Natural Environment Research Council’s British Antarctic Survey in a statement. “This study of direct satellite observations shows the complexity of climate change. The total Antarctic sea ice cover is increasing slowly, but individual regions are actually experiencing much larger gains and losses that are almost offsetting each other overall. ”

“We now know that these regional changes are caused by changes in the winds, which, in turn, affect the ice cover through changes in both ice drift and air temperature,” Mr. Holland added. “The changes in ice drift also suggest large changes in the ocean surrounding Antarctica, which is very sensitive to the cold and salty water produced by sea ice growth.”

Mr. Holland noted that Antarctic sea ice is frequently being blown away from the continent by powerful northward winds. Since 1992, the researcher said, the drift of ice away from Antarctica has doubled in some areas, while in others it has noticeably decreased.

Researchers pointed out that sea ice reflects heat from the sun and provides a habitat for marine life. During the summer, sea ice cover is at its minimum. During the winter in Antarctica, however, ice cover quickly expands to a size that is approximately twice the size of Europe. The ice cover, researchers noted, helps keep the ocean warm.

The new data helps researchers understand why observed changes in the amount of sea ice cover vary so much between the two poles. Researchers said that even though the overall ice extent in the Antarctic has grown, the increase is actually the result of much bigger regional increases and decreases, which are due to changing winds. In the Arctic, changing winds don’t cause the overall ice extent to increase because the Arctic Ocean is surrounded by land.

“The Antarctic sea ice cover interacts with the global climate system very differently than that of the Arctic, and these results highlight the sensitivity of the Antarctic ice coverage to changes in the strength of the winds around the continent,” said Ron Kwok of NASA’s JPL.

Researchers believe that this study will help scientists understand more about the impacts of climate changes on Arctic and Antarctic sea ice cover.