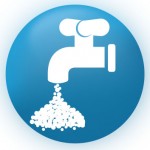 Some utilities and private well owners hope so, as about 40% of the continental U.S. battles some form of drought and demand for water continues to grow. Worries about water shortages are heating up in various areas across the nation, especially in California and other Western states, where a punishing drought has entered its third year.

In an effort to encourage conservation and manage water use more efficiently, utilities and consumers are turning to a variety of new technology tools, including software and mobile apps that let households know just how much water they are using and how that usage stacks up against the neighbors. There also are sensors that can determine when wells are running low, and leak-detection systems for homes that send alerts and shut off the water when problems are suspected.

For water utilities, running a successful conservation program is cheaper and easier than building new dams, wells or water-treatment plants. Some utilities are pushing conservation because they have government-mandated goals to meet. In California, for example, water agencies have been asked to cut urban water use 20% by 2020, to 154 gallons daily per person from 192 gallons in 2005.

That said, getting consumers to use less water is a challenge. Saving money, it turns out, isn’t an effective motivator on its own, according to research from Stanford University. That’s because even with rates going up, water remains relatively cheap, so it takes a large financial reward to entice consumers into using less. And since big rewards are often available only for a limited time, they often don’t lead to long-term behavioral change.

So startups such as WaterSmart Software, H2OScore and DropCountr have developed tools that take a different approach, one that relies heavily on peer pressure, coupled with things like conservation tips and rewards.

WaterSmart’s software creates bimonthly home-water reports from meter data that provide consumers with a clear picture of how much water they use and how their usage compares with that of neighbors living in similar-size homes. The reports, which can be delivered by mail or electronically, also provide recommendations on how households can save water—say, by watering a yard manually instead of with sprinklers during certain seasons.

Studies show that people tend to underestimate their consumption by half, says Peter Yolles, founder and chief executive of WaterSmart, a San Francisco-based company. But they also want to follow the crowd, he says, and WaterSmart taps into that desire.

“There’s a natural tendency for people to conform,” says Mr. Yolles. “But people don’t know the social norm for water use, so we give the report with bar charts that provide context.”

The East Bay Municipal Utility District, which delivers water to 350,000 single family homes in the San Francisco Bay Area, is preparing to launch a conservation program using the WaterSmart technology.

In a yearlong pilot program that ended last June, customers receiving WaterSmart reports cut consumption by an average of 5%, the district says. An analysis indicated that using the WaterSmart program to achieve that 5% savings on a broader scale would cost the district $380 to $400 per acre-foot of water, which is less than most other conservation programs and less than securing a new supply of water, says Michael Hazinski, supervisor of water conservation at the district.

Starting this summer, the water district will roll out WaterSmart to 60,000 homes, with a goal of reaching 100,000 homes in three years.

While most Americans have municipal or private water suppliers, about 14% get their water themselves through private wells that pump fresh groundwater, according to the latest data from the U.S. Geological Survey. For them, well monitoring is a key part of managing their water use.

Prolonged droughts in Western states have stressed some aquifers, resulting in significant drops in water levels in recent years. Levels in one Texas aquifer fell more than 200 feet from 2008 to 2012, according to a report by the Texas Water Development Board. Meanwhile, new wells are hitting water at twice the depth as those drilled in 1950, the board says.

Dropping a tape into a well is the most common method to determine water levels. But Wisconsin startup Wellntel has developed a sensor system for wells that not only measures water levels accurately and more frequently, but also looks at weather and other data to predict where the levels are probably headed. Well owners can use the information to determine when to reduce pumping or drill a new well.

The sensors sit on top of the well cap and use sonar to take the measurements. WelIntel is doing field trials of its technology and plans to start selling the equipment later this year, says Nicholas Hayes, a company co-founder.

WelIntel also is teaming up with researchers from the University of California, Berkeley, to create spatial maps that show water-level changes over time and across a geographical area. Those maps provide a closer look at the health of an aquifer and spot water-level changes across a region.

Wellntel started a pilot project at a home with a vineyard in the central California town of Paso Robles earlier this year. The growth of winegrape in the region (it is usually irrigated with groundwater) has caused water tables to drop hundred of meters in some places, says Norm Miller, a professor of hydrometeorology at Berkeley.

“Farmers want to know when they should completely stop drawing water, before the wells go dry,” says Raj Shekhar Singh, a graduate student at Berkeley working on the Wellntel project. “When nobody understands how the water levels are changing in their regions, they just keep pumping.”

A different kind of sensor, meanwhile, is used in homes to detect water leaks that can lead to expensive damage and wasteful water use.

Currently, most homeowners who use sensors deploy them near likely sources of water leaks, such as washing machines and dishwashers.

Sentinel Hydrosolutions LLC of California has developed a leak-detection system that is placed on the main water pipe into the home instead, an approach that eliminates the need for a sensor for “every toilet and sink,” says Scott Pallais, founder and chief executive of the company.

Sentinel’s system is programmed to monitor water flow into a home. When the flow persists past a time frame set by the homeowner—Mr. Pallais says he sets his at 20 to 30 minutes—it automatically shuts off the water and sends an alert to a home alarm system. The company is working on delivering the alerts via text and email, as well.