What Chemicals do Reverse Osmosis and Distillation Remove/Reduce?

Reverse osmosis will generally remove any molecular compounds smaller in size than water molecules. Such compounds include salt, manganese, iron, fluoride, lead, and calcium (Binnie et al, 2002). Reverse osmosis is extremely efficient at stripping minerals from water, and it is highly valued as a water purification process in the printing industry, in which mineral-free water must be used. 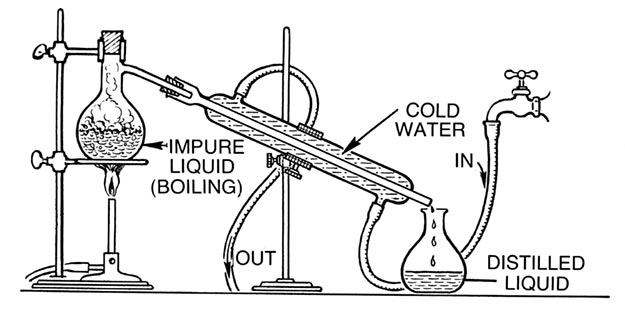 Although reverse osmosis supplies useful, mineral-free water for printing purposes, it does not provide the healthiest drinking water. Reverse osmosis will remove several mineral and chemical materials from water, including salt, fluoride, lead, manganese, iron, and calcium. Reverse osmosis, because it removes minerals according to physical size, is non-selective in its removal of dangerous and beneficial minerals.

Clearly, mineral contaminants like salt, fluoride, and lead should be removed from drinking water, but minerals like iron and manganese, because they are essential to natural body processes and important components of drinking water, should be left in that water. Iron builds and maintains healthy red blood cells while manganese helps in regulating protein, fat, and carbohydrate metabolism. Manganese, like calcium, is also an essential component in the building of bones and the clotting of blood. Though many foods contain these minerals, drinking water can and should be a major source for their intake.

Distillation removes chemicals similar to those removed by reverse osmosis, but in a different manner. Distillation, through its water evaporation process, will remove any chemicals or organic materials with higher boiling points than water. Such chemicals and organic materials with higher boiling points include bacteria, minerals, trace amounts of metals, many volatile organic chemicals (VOCs), and nitrate (Binnie et al, 2002). Clearly, distillation is valuable in its removal of the potentially deadly VOCs and nitrate. It strips water of nearly all of its natural minerals, though. Many of the minerals the distillation process removes are vital to the body’s natural processes. The distillation process is not selective in its removal of minerals, and it strips water of both dangerous and valuable mineral compounds.