Our ancient ancestors’ ability to move around and find new sources of groundwater during extremely dry periods in Africa millions of years ago may have been key to their survival and the evolution of the human species, a new study shows. 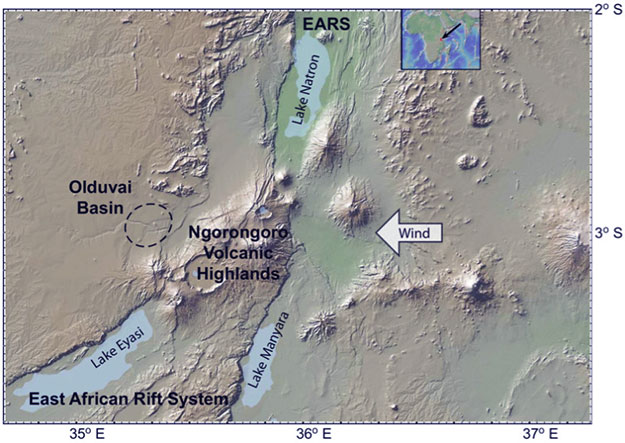 Insert shows with arrow the location of study area in eastern Africa. Map of the Northern Tanzanian Divergence Zone depicts the East African Rift System (EARS), containing Lake Natron (north), diverging around the Ngorongoro Volcanic Highland massif and splitting into two separate rift valleys (Lake Eyasi on west) and Lake Manyara (on east). Prevailing wind is from the east. Olduvai basin lies to the west of and in the rain shadow of Ngorongoro.

The research — published in the journal PLOS ONE — combines geological evidence from the Olduvai sedimentary basin in Northern Tanzania, which formed about 2.2 million years ago, and results from a hydrological model.

It shows that while water in rivers and lakes would have disappeared as the climate changed due to variations in Earth’s orbit, freshwater springs fed by groundwater could have stayed active for up to 1000 years without rainfall.

Potable water in rivers or lakes in the region is likely to have been scarce, owing to salinity, drought and the short-lived flow of streams. Groundwater may have provided “a key alternative potable resource for sustaining life” in this environment.

“Springs and groundwater-fed habitats could have played a decisive role in the survival and dispersal of hominins in times when potable surface water was limited,” Dr Cuthbert said.

Geological evidence pointed to the springs being active during the driest periods of climate fluctuations that occurred around 1.8 million years ago, a critical period for hominin evolution.

In addition, modelling by the researchers showed springs at Olduvai may have stayed active for hundreds of years without rainfall.
“As surface water sources became more scarce during a given climate cycle, the only species to survive may have been those with adaptations for sufficient mobility to discover a new and more persistent groundwater source, or those already settled within home range of such a resource,” co-author Professor Gail Ashley, Rutgers University (US), said.

“Such groundwater refugia may have been sites for intense competition between hominin and other animal species and hence selective pressure favouring those who could maintain access to water, something for which there is no substitute.

“Furthermore we speculate that, during wetter periods, springs may have formed ways of ‘bridging’ longitudinal dispersal of hominins between larger freshwater bodies or rivers providing a critical resource during hominin migration within and out of Africa,” Professor Ashley said.

Professor Andy Baker, Director of UNSW’s Connected Waters Initiative, welcomed the study, adding, “Here in Australia we are very aware of the importance of groundwater to our national economy today.
“This study clearly suggests that we should consider the role of groundwater throughout the history of the settlement of our continent.”

The scientists said more research is needed to test their theories about the role that groundwater may have played in human evolution and dispersal.