The secret life of the sea trout

Jan G. Davidsen and his graduate students are spies. They use listening stations and special tags they attach to their subjects to track their movements. They follow their subjects winter and summer, day and night. They are in pursuit of secrets. And they are relentless. 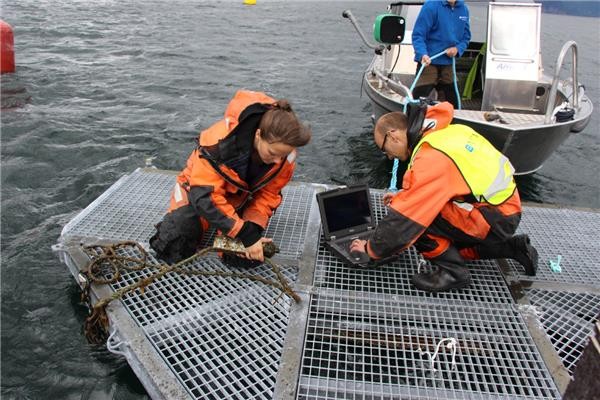 Master’s student Anne Cathrine Flaten (left) and researcher Jan Davidsen from the Norwegian University of Science and Technology remove a listening device from Snillfjord in central Norway so they can download data on the movements of sea trout in the fjord.

Fortunately, this is not the Stasi, nor the KGB. Davidsen is a biologist at the Norwegian University of Science and Technology’s University Museum, and his subjects are 15 cm long slivers of silvery sea trout.

Sea trout, Salmo trutta L., the salmon’s lesser well-known cousin, is a popular sport fish in Norway that has had a hard time of late.

Over the past several decades, sea trout numbers in central Norway have dropped by roughly 60 per cent, Davidsen says. No one really knows the reason for this precipitous reduction.

At least not yet.

Sea trout, also known as brown trout, live complicated lives. Like salmon, they begin their lives in a river, hatched from eggs that were laid in small nests, called redds. As the young fish mature, they go through several developmental stages, all of which involve substantial physiological changes. The most important stage from this perspective is when the fish becomes a smolt, after about 2 years.

Entering the smolt stage is like being given a passport out to the sea, because the physiological changes allow the fish to tolerate salt water.

Fish that undergo this transformation, like Atlantic salmon, are called anadromous, which means they leave the rivers and streams where they were born and spend much of their adult life at sea, only returning to the river where they hatched to spawn again.

The benefit to a fish of being able to leave a river and move to the sea is that there is much more food out in the ocean for a fish to eat.

But while sea trout can be anadromous, they aren’t always, for reasons researchers don’t really understand. Some environmental or physiological condition decides whether or not they will head out to the sea. This difference matters when it comes to both growth and survival — and is part of what Davidsen is trying to figure out.

Sea trout are “very interesting fish, because they have this very highly variable life history,” he says. “It can be a pure freshwater fish, or it can migrate out to the sea, or something in between. I think that is really fascinating that it can really cope with all these things.”

Finding which areas to protect

This issue of when and if sea trout will decide to become anadromous is a critical factor as fisheries managers try to bolster mid-Norway’s foundering population by supplementing it with hatchery raised smolts.

It also matters to government officials like Martin Hanssen, the nature manager for Hemne municipality, who has to figure out which areas need protection to ensure that sea trout populations don’t continue to decline. An area in the fjord that is important for maturing sea trout, for example, might not be the best place to site a fish farm.

Davidsen’s research area is partly in Hemne municipality, and Hanssen and volunteer Ola Magne Taftø have been helping out with the research every day for a month this spring by emptying a fish trap that was set in the Søa River to catch smolts.

“I’m really interested in the data on which areas are most important for sea trout,” Hanssen said in early June, as he and Taftø helped Davidsen and his crew remove the fish trap. “Jan has promised me a map that will show the most important areas. He said he thought it would be easy to make one, but now he sees it’s not so simple.”

Davidsen’s work would be much easier if he could simply ask a fish where it has been and why. But since this is clearly impossible, Davidsen has to spy on his subjects.

The first step was to fit 50 sea trout smolts with 2 cm long cylindrical acoustic tags about the width of a pencil, which the researchers did in May. The tags can be monitored by a series of 43 listening stations that Davidsen and colleagues put out in the Søa River and in nearby Hemnefjord and Snillfjord in February.

The listening stations are about the size of an aerosol can of whipped cream. Each station is attached to a float and hangs in the water 5 meters below the fjord surface. They are strung across the width of Hemnefjord and Snillfjord’s arms, as well as across a shared arm that leads to the open sea.

The listening station works a little bit like a grocery scanner — every time a fish swims by a station, the station makes a note of the marker tag number.

The station can store months of data at a time, but the only way to retrieve the data is by boat. Each listening station has to be pulled out of the water and activated with a special key that tells the station to send its data to a computer via a Bluetooth connection.

And that is exactly what has brought Davidsen and his master’s student, Anne Cathrine Flaten, along with University Museum senior engineer Lars Rønning and a Gemini reporter out to Hemnefjord on a sunny June day earlier this summer.

Different behaviour at different times of the year

There’s a little tension in the air as the project’s research boat, the Sinus, is lowered into the fjord. The two-day long field excursion will be the first time that Flaten gets to see what the smolts have been up to and how well they are being tracked by the listening stations.

No one really knows how the tagged fish will behave, which is exactly the reason the researchers are doing their study.

“Some sea trout are resident in the fjords, and some go out to the sea,” Davidsen said. Their movements are also different in the summer and winter, he said, depending upon whether they live in a river or in Rovatnet, the lake at the head of the Søa River.

The picture-postcard pretty Rovatnet is a very stable and protected place for fish, because it is 90 meters deep and covered by a thick protective layer of ice in the winter. A river isn’t nearly as protective or inviting.

But the fjord and the open ocean also pose their own risks. Fish farms in the fjords can be a source of sea lice, which plague sea trout. The sea is also home to many more predators than a river or a lake. All of these factors affect the sea trout and play a role in their population numbers over time.

Data collected from this area last year show that fish from Rovatnet spent only two months feeding in the fjord, after which they returned to the lake, whereas sea trout that live in the Snilldals River spent up to 10 months in the fjord, especially in the area where the river empties into the fjord.

Davidsen pilots the Sinus out into Hemnfjord and the researchers scan the water for the bright orange round floats that mark each listening station.

They’ve also got each listening station’s GPS coordinates marked on the live map that is part of the Sinus’s navigation system. They pull up to the first float, and Davidsen, dressed in a full float suit, heads out on deck with a hook to snag the orange float and haul the listening station out of the water.

It’s a drill that will be repeated time and again during the two-day trip — hook the float, haul the listening station out of the water, activate the Bluetooth connection, and download the data to the computer.

Flaten waits anxiously as Davidsen turns the key in the listening station. Suddenly, a stream of numbers fills her screen and shows her marked fish swimming by the station time and again.

“So there will be a master’s thesis,” Davidsen says smiling, looking over Flaten’s shoulder as the data downloads. She nods, clearly relieved.

Flaten will use the data to monitor and map the behavior of the smolts in the fjord system. “I’ll be able to see where they have migrated to, and when, and where they stay,” she said.

She has also collected fish scales and blood samples from some of the fish, which can tell her about their physiological condition. Davidsen hopes that the information will also help explain why sea trout numbers have dropped so strongly.

Davidsen looks forward to finding the answers to these puzzles. But he also clearly enjoys spying on the behaviour of his 15 cm subjects.

“It’s fascinating to me that we can track a single fish that is this size in this fjord,” he says, holding his index fingers 15 cm apart, the length of a smolt. “But it is the only way to do it.”