Nicaragua has announced the start of work on a new canal linking the Atlantic and Pacific Oceans. At an opening ceremony, Wang Jing, the president of HKND, the Chinese company building the canal, said this moment would go down in history. 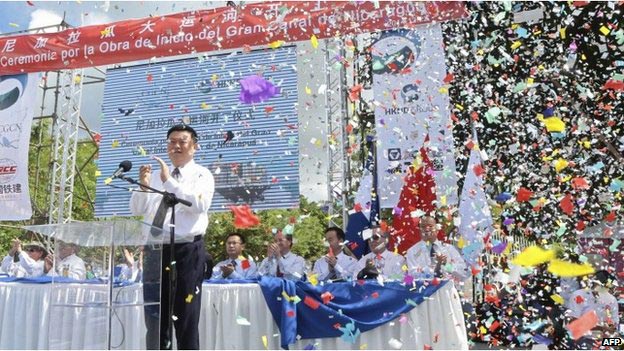 The 278km (172 mile) waterway will be longer, deeper and wider than the Panama Canal. But critics fear a negative environmental impact and doubt its viability and economic benefits.

The Grand Canal of Nicaragua, as it has been called, aims to rival Panama’s waterway and lift the country out of poverty. The opening ceremony was largely symbolic, as work began on an access road for machinery needed to build a port for the canal on Nicaragua’s Pacific coast.

Nicaragua’s Vice-President Omar Halleslevens said the canal would change the history and the economy of Nicaragua, one of Latin America’s poorest countries.

“With this great canal, Nicaragua expects to move 5% of the world’s commerce that moves by sea, which will bring great economic benefits and double the GDP (gross domestic product),” said Mr Halleslevens.