Chinese construction is due to start—but of what?

ON DECEMBER 22nd an odd couple—Nicaragua’s left-wing government and a Chinese-born telecoms magnate—say they will begin the realisation of a dream that has captivated Nicaraguans for generations: the construction of an inter-oceanic canal to rival Panama’s. According to Manuel Coronel, an octogenarian who runs the canal authority, their intentions are now beyond dispute. “When the bride and groom set a date, you know it’s serious,” he says. 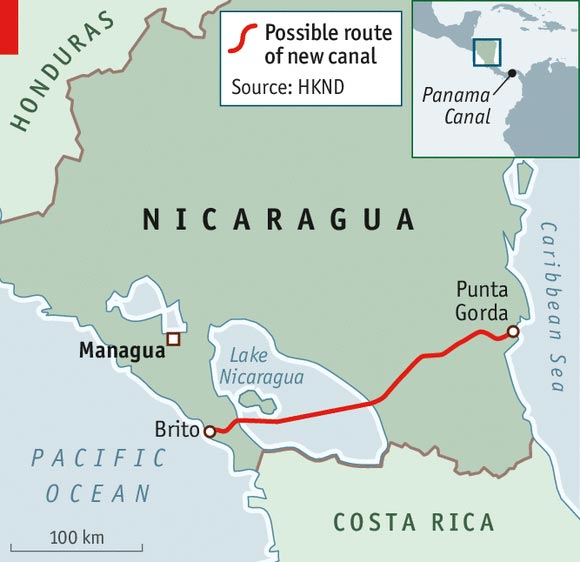 But ask Mr Coronel just where construction will begin and who will pay for it, and he has no answers. Neither does HKND, the Hong Kong-based company run by Wang Jing, which is to build the $50 billion waterway. The project has been shrouded in secrecy since Nicaragua’s National Assembly awarded a 50-year concession to HKND in 2013. No feasibility study, environmental-impact report, business case or financing plan has yet been released. Instead come platitudes from the Sandinista government of Daniel Ortega about how it will bring a jobs bonanza and end poverty.

So far, it has brought as much fear as hope. Since Chinese-speaking surveyors, backed by Nicaraguan soldiers and police, began assessing land and houses along the canal’s proposed 278km (172-mile) route a few months ago (see map), peasants fearful of their land being expropriated have taken to the streets 16 times. On December 10th several thousand, shouting “We don’t want the Chinese”, protested in Managua, the capital, despite police efforts to keep them in their villages, activists say. Boatmen in Punta Gorda on the Caribbean coast have refused to ferry heavy machinery to be used to begin construction, fearing their livelihoods will be harmed.

In November the Nicaraguan Academy of Science convened a panel of experts to demand clarification of the impact of dredging sediment along a 105km stretch of Lake Nicaragua. They said it could damage drinking water, irrigation systems, fishing and biodiversity in one of Latin America’s greatest tropical lakes. Engineers say the proposed canal, which is aimed at enticing bigger ships than those now able to cross between the Atlantic and Pacific, could run massively over budget and provoke further widening of the Panama Canal, which would ruin its business case.

Many still doubt it will ever be built. Carlos Fernando Chamorro, editor of an anti-Ortega publication, Confidencial, says the only groundbreaking on December 22nd will be for an access road to a proposed port near Brito, on the Pacific coast, at what is expected to be one entrance to the canal. Some experts think the port, a proposed airport nearby and a free-trade zone may be as far as the canal gets.

But the case for a canal may not rest only on tolls and jobs. China may see it as a strategic route to the Atlantic, says Evan Ellis of the United States Army War College. If so, it might be built after all.