Groundwater depletion will soon be as important a factor in contributing to sea-level rise as the melting of glaciers other than those in Greenland and Antarctica, scientists say. 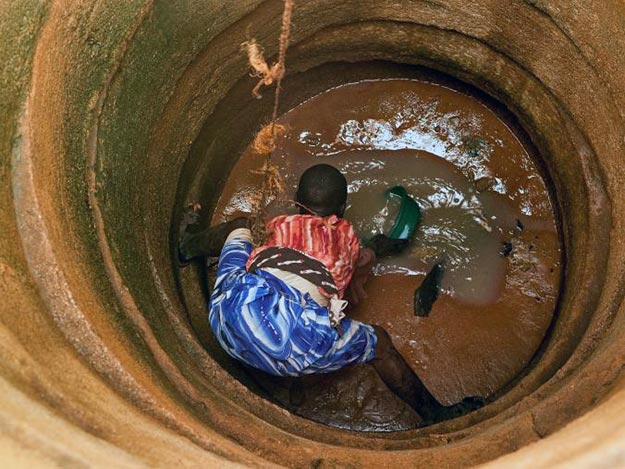 A Tanzanian teenager scoops up muddy water from a well. Many of the world’s aquifers are being pumped out faster than they can replenish, a process that will increase sea level rise.

That’s because water pumped out of the ground for irrigation, industrial uses, and even drinking must go somewhere after it’s used—and, whether it runs directly into streams and rivers or evaporates and falls elsewhere as rain, one likely place for it to end up is the ocean.

To find out how much of an effect this has on sea level, a team of Dutch scientists led by hydrologist Yoshihide Wada, a Ph.D. researcher at Utrecht University, divided the Earth’s land surface into 31-by-31-mile (50-by-50 kilometer) squares on a grid to calculate present and future groundwater usage.

To make the calculation as precise as possible, they used not only current groundwater-use statistics from each country, but also economic growth and development projections. They also took into account the impact of climate change on regional water needs, considering “all the major factors that contribute,” Wada said.

Newly constructed reservoirs above ground can offset the net loss of water underground. These, Wada said, trap water that would otherwise reach the sea.

Before 1990 or so, he added, that offset was large enough that the United Nations’ Intergovernmental Panel on Climate Change never took groundwater depletion into account in predicting 21st-century sea-level rise.

But that offset is no longer as significant as it once was, Wada said. “There are not so many places where people can build new reservoirs,” he said. “They are already built.”

Already, he and his colleagues have found, groundwater depletion is adding about 0.6 millimeters per year (about one-fortieth of an inch) to the Earth’s sea level. By 2050, he said, the triple pressures of growing population, economic development, and higher irrigation needs due to a warming climate will increase that to 0.82 millimeters per year—enough to raise sea levels by 40 millimeters (1.6 inches) above 1990 levels. Between 2050 and 2100, according to some estimates, sea levels would rise even faster.

To put that in perspective, he said, groundwater depletion adds about 25 percent to projected rates of sea-level rise, making it the largest contributor from land to sea-level rise other than the melting of the Greenland and Antarctic ice sheets. Even the melting of glaciers in the world’s high mountains won’t contribute more to rising sea levels, Wada said.

What’s more, groundwater depletion isn’t the only way in which water now stored on land can find its way into the sea. The draining of wetlands, Wada said, has the same effect, as do declining water levels in bodies of water from the Dead Sea to Asia’s giant Caspian Sea.

Even deforestation adds to the effect, he said, because trees hold large quantities of water that evaporates when the wood is used for lumber, paper, and other manufactured goods.

“This water goes to the oceans, as well,” Wada said.

Overall, he calculated, these minor factors add nearly another 6 percent to the total effect from non-ice, land-based sources.

Other scientists are skeptical. “This is an interesting study,” said Ken Caldeira, a climate scientist at the Carnegie Institution for Science’s Department of Global Ecology, in Stanford, California.

In an email, he said, the researchers might have overstated their findings by failing to realize that groundwater seeps into rivers, increasing their flow. Lowering the groundwater table will reduce this seepage, he said, partially offsetting the effect by reducing the amount of river water reaching the sea.

Also, he noted, the study projects that groundwater depletion and related effects could produce as much as a 4-inch (10-centimeter) rise in sea level by 2100.

“Since land covers only about 30 percent of the planet, this means that you would need to deplete an average of 33 centimeters (about 13 inches) of water from all the land on our planet. This is a huge amount of water.”

Another problem is that the study does not take into account the increasing difficulty of pumping water from depleted aquifers, said Leonard Konikow, a hydrogeologist at the U.S. Geological Survey’s office in Reston, Virginia. “The rate of pumping will have to decrease.”

Wada agrees this is a potential problem in the study. “We don’t have good data on [that],” he said. “If the groundwater table becomes too low, the farmer with low technology might not be able to pump anymore.”

But, Konikow said, his own research (published in Geophysical Research Letters) suggests that Wada’s team’s estimates are still too high by about 30 to 35 percent.

“Their method of estimating depletion is based on indirect calculations based on global climate models,” he said. “My own estimates are based on volumetric analyses of aquifer systems throughout the world, in which we’re actually looking at water-level changes in as many aquifers as possible.”

Still, he noted, it’s an important effect. “I think it has to be considered in predicting future sea level,” he said.

Wada said the solution is to find ways of improving the efficiency of water in agriculture: in essence learning to grow more, with less.

Caldeira agreed. “I think this says more about the mismanagement of our land than it does about the threat from sea-level rise,” he said.