A new study of satellite data from the last 19 years reveals that fresh water from melting glaciers has caused the sea-level around the coast of Antarctica to rise by 2cm more than the global average of 6cm.

Researchers at the University of Southampton detected the rapid rise in sea-level by studying satellite scans of a region that spans more than a million square kilometres. 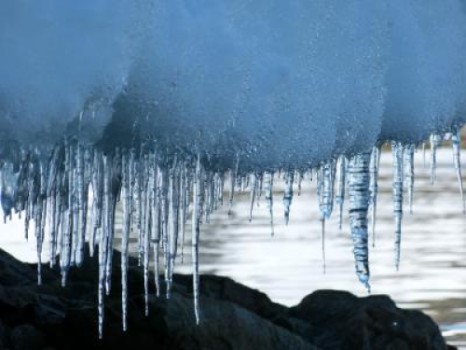 Icicles are formed by the melting of a glacier in west Antarctica. The melt here is rapid and has been accelerating, injecting greater quantities of freshwater into the ocean and raising sea levels.

The melting of the Antarctic ice sheet and the thinning of floating ice shelves has contributed an excess of around 350 gigatonnes of freshwater to the surrounding ocean. This has led to a reduction in the salinity of the surrounding oceans that has been corroborated by ship-based studies of the water.

“Freshwater is less dense than salt water and so in regions where an excess of freshwater has accumulated we expect a localised rise in sea level,” says Craig Rye, lead author of the paper that has been published in the journal Nature Geoscience.

In addition to satellite observations, the researchers also conducted computer simulations of the effect of melting glaciers on the Antarctic Ocean. The results of the simulation closely mirrored the real-world picture presented by the satellite data.

“The computer model supports our theory that the sea-level rise we see in our satellite data is almost entirely caused by freshening (a reduction in the salinity of the water) from the melting of the ice sheet and its fringing ice shelves,” says Rye.

“The interaction between air, sea and ice in these seas is central to the stability of the Antarctic Ice Sheet and global sea levels, as well as other environmental processes, such as the generation of Antarctic bottom water, which cools and ventilates much of the global ocean abyss.”

The research was carried out in close collaboration with researchers at the National Oceanography Centre and the British Antarctic Survey.