Sparkling Water Is The New Soda

The hottest drink in America is water with bubbles.

Long a kitchen table staple in European households, sparkling water is making inroads in the U.S. thanks largely to Americans’ waning interest in soda. Between 2009 and 2014, the volume of carbonated bottled water sold in the U.S. has increased by 56.4 percent, according to data from Euromonitor International, a market research firm. Soda drinking declined sharply during the same period.

It has a way to go before it catches up to soda, but sparkling water is indeed having a moment.

The growth in millions of liters of sparkling water sold in the U.S. 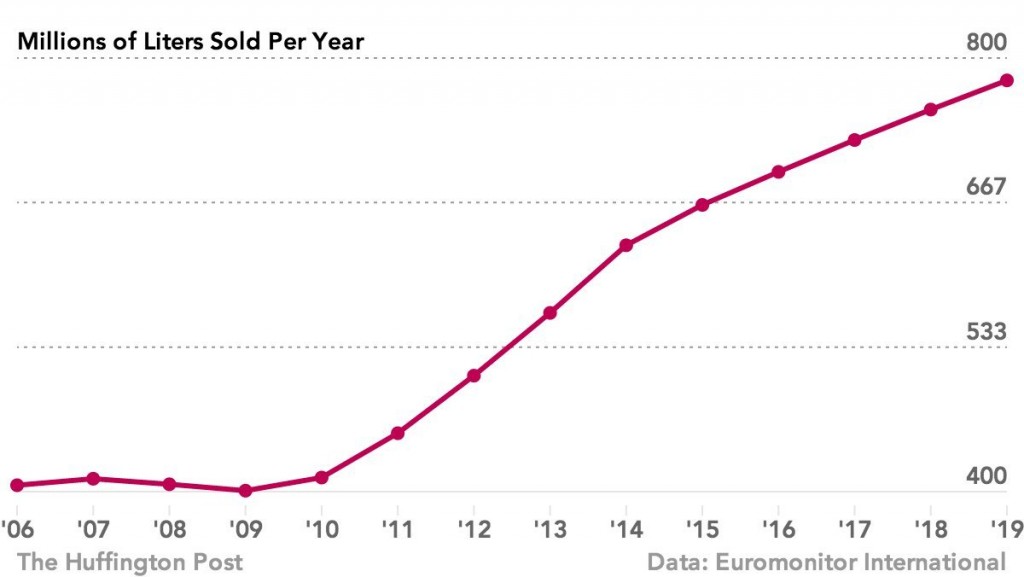 The decline in millions of liters of soda sold in the U.S. Note that the scale is very different from the chart above, with soda sales still dwarfing sparkling water sales. 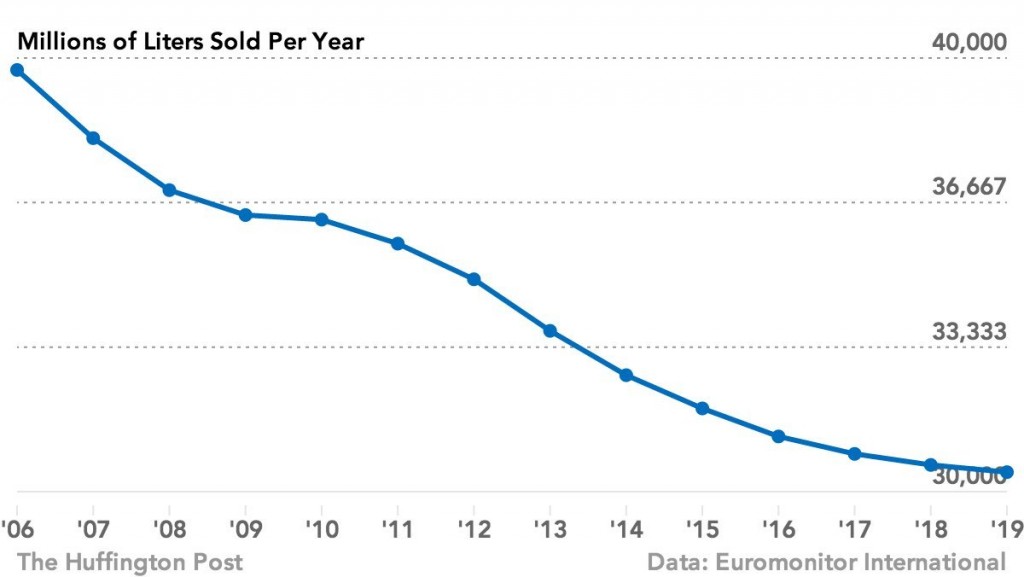 Americans’ growing obsession with health is the biggest reason for the shift, according to Jonas Feliciano, a global beverage analyst at Euromonitor. Coke and Pepsi have resorted to hawking products like energy drinks and even milk to boost sales as Americans become increasingly wary of the high levels of sugar in soda.

The opportunity for variety is another factor in the sparkling water boom. These beverages are available in a range of flavors, from orange-pineapple to kiwi-strawberry. Feliciano noted that most mainstream soda comes in just cola and lemon-lime flavors. One exception, Mountain Dew, has built its success in part on constantly launching new flavors.

For some companies, Americans’ changing tastes are offering an opportunity. The growth in sales at Washington-based Talking Rain Beverage Company, which makes flavored sparkling water, has pretty much directly mirrored the rise of the beverage’s popularity. The company brought in more than $384 million in sales in 2014 compared to just $2.7 million in 2009. Sparkling Ice, a Talking Rain line of zero-calorie sparkling water in flavors like pink grapefruit and peach nectarine, is responsible for most of that growth.

Kevin Klock, Talking Rain’s CEO, says the company doesn’t try to make health claims about its drinks because shoppers recognize on their own that sparkling water is probably healthier than soda.

Sparkling Ice on display in New York.
Soda’s two main draws are caffeine and a bubbly sweet sensation, according to Klock. As concerns about soda’s health consequences mount, drinkers are turning to coffee and energy drinks for their caffeine fix, and flavored sparkling waters for that throat-tickling combination of bubbles and sweetness.

“I don’t see it as a fad,” Klock said of flavored sparkling water, noting that the trend in all beverages, including liquor and beer, is toward more variety and flavor.

SodaStream is betting big that interest in sparkling water continues to grow. The at-home carbonation machine company has shifted its marketing in recent months to focus more on the product’s ability to make sparkling water and less on its ability to make soda. SodaStream rebranded its devices as sparkling-water makers instead of soda makers, and it has changed its slogan from “set the bubbles free” to “water made exciting.”

Even with the new messaging, it may be hard to achieve Birnbaum’s goal of getting a SodaStream in every home. Feliciano notes that low-income shoppers aren’t likely to make the switch from soda to sparkling water anytime soon. Even those who don’t shell out for a SodaStream machine — the cheapest option on the company’s website is $79.99 — will probably find better deals on soda than sparkling water.

“This is still not for the masses,” Feliciano said.

But Birnbaum is confident that Americans’ shift away from soda is more than just a whim.

“We feel like we are now at the early stages of a revolution in the beverage industry in America,” Birnbaum said, noting that about 70 percent of SodaStream’s customers globally use the machine only for carbonating water.

“The death of soda comes with the life of something else,” Birnbaum said.