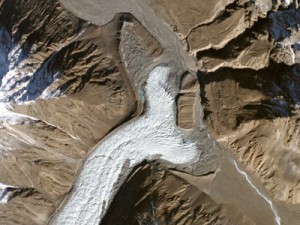 A remote Indian village is responding to global warming-induced water shortages by creating large masses of ice, or “artificial glaciers,” to get through the dry spring months.

Located on the western edge of the Tibetan plateau, the village of Skara in the Ladakh region of India is not a common tourist destination.

“It’s beautiful, but really remote and difficult to get to,” said Amy Higgins, a graduate student at the Yale School of Forestry & Environmental Studies who worked on the artificial glacier project.

“A lot of people, when I met them in Delhi and I said I was going to Ladakh, they looked at me like I was going to the moon,” said Higgins, who is also a National Geographic grantee.

People in Skara and surrounding villages survive by growing crops such as barley for their own consumption and for sale in neighboring towns. In the past, water for the crops came from meltwater originating in glaciers high in the Himalaya.

But in recent decades, climate change has uncoupled glacial melt cycles in the Tibetan Plateau—which is warming up on average two degrees Celsius faster than the rest of the world—from the traditional agricultural season, causing water shortages in April and May when Ladakhis typically begin sowing seeds for the summer season. If the villagers don’t sow during this critical window, there is no crop that year.

One winter in the late 1980s, an engineer from Skara named Chewang Norphel came up with a possible solution to his village’s problem while strolling around his backyard.

Norphel noticed that a small stream had frozen solid under the shade of a poplar grove, though it flowed freely elsewhere in his sunny yard. The reason for this, he realized, was that the flowing water was moving too quickly to freeze, while the sluggish trickle of water beneath the grove was not.

Over the next several years, Norphel worked to create an irrigation system that functioned using the same simple natural principle. The result has been Ladakh’s artificial glaciers. Ten have been built to date.

To create the glaciers, Norphel and his team of engineers divert water from rivers into neighboring valleys that have been carefully penned in with rocks. This step usually takes place in the winter months of October through December. To slow the water down to a trickle, the diversion canals often take long meandering routes around mountainsides.

Once it arrives in the valley, the water freezes in a shallow layer in small pools. The process is repeated until the stacked layers of ice are several feet thick. If too much water is added too quickly, the result is a slushy pit. “It takes a lot of patience,” Higgins said.

The largest artificial glacier created to date occupies an area of more than a square mile. Because the artificial glaciers sit at a much lower altitude than true glaciers, they melt sooner, in time for the villagers’ spring planting.

“You could do the same thing by building a big water reservoir,” Higgins said, “but it would require a lot more materials, and the water would evaporate because there’s so much sunshine. You would also have to worry about it getting contaminated.”

Peter Gleick is a water expert and president of the Pacific Institute research center in Oakland, California. Gleick, who was not involved in the project, called the artificial glaciers an innovative solution to the region’s increasingly difficult changes in climate.

“I think they’re great and likely to play a role, at least in the short term, in helping some of these high-elevation villages deal with the very real and immediate changes to the melting glaciers in the Himalaya,” he said.

Gleick worries, however, that in the long run, the gradual disappearance of high-elevation natural glaciers will make it increasingly difficult to create and maintain the artificial glaciers.

“I’m not optimistic that the [artificial glaciers] are going to be sustainable in the long run,” he said.

Environmental chemist William Cooper, who also played no role in the project, called the artificial glacier project an “interesting and noble idea.”

“If he is able to actually store that much water as ice and release it later by natural processes, it’s a low-cost alternative to dams,” said Cooper, director of the Urban Water Research Center at the University of California, Irvine.

Norphel, the Skara engineer, calculated that a real glacier containing about one million cubic feet—about 7.5 million gallons—of water could be used to create an artificial glacier capable of irrigating about 380 acres of land.

“Even though that sounds like it’s a lot of water, it doesn’t sound like an awful lot to me,” Cooper said.

For comparison, he added, a water reuse plant in Southern California typically recycles about 70 million gallons of water—per day.

The amount of water stored in the artificial glacier is also tiny compared to the flow rate of the Indus River, where most of the glacial melt ultimately ends up. For this reason, they are unlikely to have any major negative downstream effects, Cooper said.

Asked if she thought the artificial glaciers might have a negative downstream effect, Higgins said, “In my opinion, no. More of the water is taken up by the crops being grown, but it would otherwise flow unused out to the Arabian Sea during October and November.”

Like Gleick, Cooper worries about how engineers in the region will maintain their painstakingly created frozen lakes when the true glaciers are gone. But even before that happens, the true glaciers will melt completely, and that might cause flooding that could threaten the artificial glaciers, he said.

Higgins added, “If climate change continues, and glaciers shrink from warming temperatures, then yes, eventually there would be no water to sustain the artificial glaciers. But then there’s no water for life, which would be a pretty bad scenario not just for Ladakh but for much of the world that relies on snowpack and glacial melt as a water source.”

For now, though, the man-made glaciers appear to be making a real difference among farmers in Skara and the surrounding communities.

Surveys conducted by Higgins show that not only can farmers sow their seeds on time, they can also plant crops that require more water, such as potatoes and peas.

“People depend on the artificial glacier more now,” one villager told Higgins.

“The one problem is it melts so quickly. But on the upside, we make the glacier, it’s good for the field.”

Will such solutions become more common in an increasingly water-stressed world?