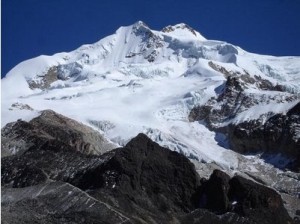 University at Albany climate scientist, Mathias Vuille, will lead the development of a network of local scientists and stakeholders in four South American countries to address the impact on water supplies of shrinking glaciers in the Andes.

A number of studies in recent years have documented the general retreat of glaciers in the Andes. As a result, water managers and decision makers are increasingly asking the scientific community for quantitative projections regarding future water supply.

According to Vuille, an assistant professor in the Department of Atmospheric and Environmental Sciences at UAlbany, the four countries – Colombia, Ecuador, Peru, and Chile – all rely to a great extent on water released by glaciers. Warming temperatures, however, have resulted in significant glacial retreat, shrinkage and thinning, and the situation suggests the potential for a severe future water crisis in the region.

“We plan to create the Andean Climate Change Interamerican Observatory Network (ACCION) with the aim of increasing the capacity in the Andean region and to deal with this crisis in an anticipatory manner. The goal is to build a sustainable network of local scientists and stakeholders who can translate and implement the latest scientific results into on-the-ground adaptation measures in the four countries,” said Vuille.

The project team includes scientists from several European institutions and universities, research centers and NGOs in South America. The team will coordinate its activities with related efforts by international organizations, such as UNESCO, the Inter-American Development Bank and the Swiss Agency for Development and Cooperation. In each of the four countries, training workshops for local scientists, water managers and related stakeholders, and outreach activities are also planned to help close the gap between scientific research and local planning and adaptation.

Vuille said the plan is to “leverage the variety of already existing but seldom coordinated and somewhat disconnected initiatives and efforts ongoing in the Andes.”

The project is funded by a $990,000 grant from the U.S. Department of State’s Bureau of Western Hemisphere Affairs.

The project will also bring several students from South American countries to UAlbany to work toward doctoral degrees in the Department of Atmospheric and Environmental Sciences. Their areas of study will be related to climate change, glaciers and water resources as they pertain directly to their home countries.

“When these students return to their home countries, they will be able to apply their expertise to better understand and project climate-related changes in glacial runoff and stream discharges. Their information and analyses will, in turn, inform policy making,” said Vuille.

The Andes are relatively moist compared with extremely arid coastal deserts to the west or the semi-arid pampas to the east. Much of the snow falling in the Andes is stored as ice in mountain glaciers, before being gradually released over time.

“Glaciers therefore act as critical buffers against seasonal precipitation and provide water for domestic, agricultural or industrial use during periods when rainfall is absent,” said Vuille. “By bringing together communities from natural, engineering, social and economic sciences with affected populations and decision makers we hope to establish a predictive understanding of future Andean water supply and demand.

It is in this context that adaptation and mitigation strategies regarding a sustainable future water supply in the region need to be discussed and evaluated.”

Vuille has more than 20 years of experience working in all Andean countries on climate change, glacier retreat and water resources and has collaborated for several years with the organizations participating in this project.

He has published more than 50 peer-reviewed articles on topics of climate change, glacier mass and energy balance and serves as a contributing author to the Intergovernmental Panel on Climate Change. He is a senior fellow in the Energy and Climate Partnership of the Americas (ECPA).