This Bottle Turns Air Into Water As You Ride Your Bike

Someday soon, cyclists might never again have to worry about running out of water on a hot and humid day.

A gadget created by Kristof Retezár, an industrial design student at the University of Applied Arts in Vienna, collects and condenses moisture from the air while a bicycle is in motion. It then fills up a water bottle attached to the bike frame.

Named after the Roman god of wells and springs, “Fontus” uses the principle of thermoelectric cooling, in which an electricity-powered heat pump transfers heat from one side of a container to another.

Fontus is still in the prototype stage. The design was recently a finalist for the 2014 James Dyson Award, an international design competition.

So how does it work? According to a description of the product on the award site, solar panels generate the electricity needed to cool the upper chamber of the device, while the bottom heats up. As the bike moves forward, air is pulled in, and then slowed and cooled as it moves through that upper chamber. The moisture from the air then condenses into water and drips into a bottle.

After cooling and condensing, the water drips into the prototype.

Of course, bikers can bring water with them. But in an interview with The Huffington Post, Retezár said he sees potential for the device in long and intense bike tours where water is scarce.

Retezár claims that in hot and humid weather, in which the product works best, Fontus can produce 0.5 liters of water in an hour. The system starts to work well, he said, when temperatures hit 20 degrees Celsius (or about 68 degrees Fahrenheit) and humidity gets to 50 percent. At that point, the product produces about a drop of water a minute. You’ll need to bike for a while to fill up the bottle.

Those conditions aren’t easy to find in Vienna. So to test the system, Retezár simulated different atmospheric conditions in his bathroom. 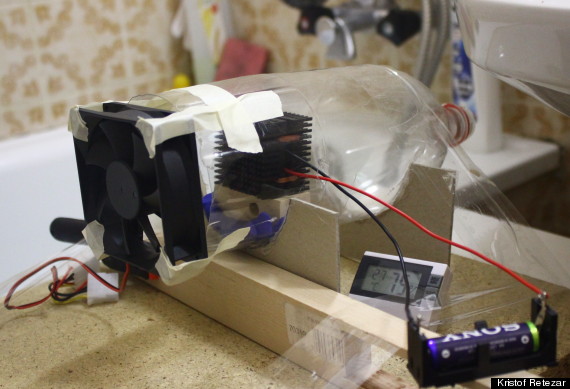 The designer used his bathroom as his laboratory to simulate different humidities.

The device has no purification system yet, so the current design won’t work well for city commutes with dirty air. But Retezár said that Fontus does have filters that keep dust out of the water.

The basic elements of the device aren’t too expensive, Retezár said. He estimated that the prototype cost between $25 and $40 to make. However, that may change depending on future iterations of the gadget, he noted, since he hopes to refine and further optimize the device.

Retezár said he and a partner are looking for investors and are considering crowdfunding options to help them with funds for further refining and, later, mass-producing the device.

The current prototype cost $40 or less to make.

Retezár sees potential applications for his device beyond the world of cycling. For example, a product like Fontus could be used to generate water in places where ground water is scarce or polluted, assuming the climate conditions were right.

“I wanted to bring a solution to many problems, including water scarcity,” Retezár said.