To save water, cool power plants with wax, say engineers

Nearly all power plants in the United States use water to regulate temperature. These water-cooled plants account for more than 40 percent of the nation’s freshwater withdrawals each year. 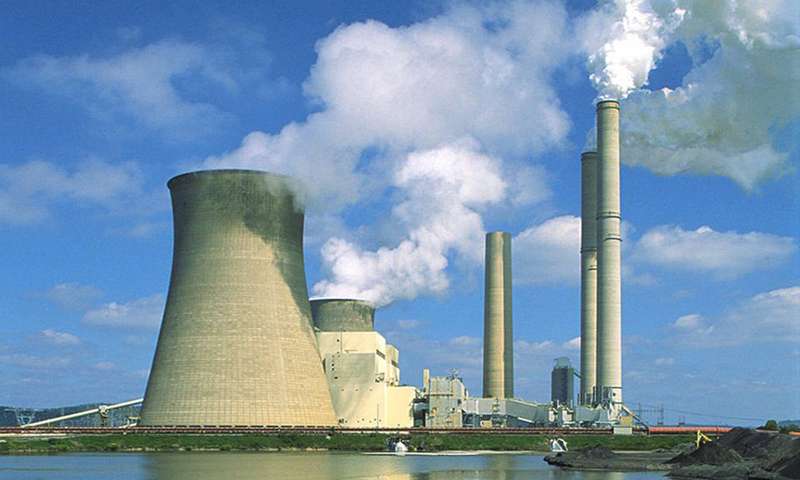 Nearly all power plants in the United States use water to regulate temperature. These water-cooled plants account for more than 40 percent of the nation’s freshwater withdrawals each year.

The towering plumes of steam emanating from power plant calderas that have come to symbolize the massive and, at times, menacing nature of the energy industry might soon have their natural dissipation into thin air preempted by a figurative one. A team of researchers from Drexel University, in concert with experts from academia and industry, are creating a new technology that replaces the voluminous amounts of steam-producing water used to cool the plants with trillions of tiny wax beads—and could be the end of those fluffy, yet ominous, white clouds.
More than 41 percent of all freshwater withdrawn from rivers and lakes across the United States is used to cool thermoelectric power plants. Recent drought conditions in California have focused attention on the nation’s need to protect its water supply. As a result, the U.S. Department of Energy is looking for a better way to cool off some of the country’s 7,304 power plants—99 percent of which are water-cooled.

The Department’s research wing, the Advanced Research Projects Agency-Energy, is funding a three-year $3 million grant led by representatives from Drexel and the University of Memphis, the Electric Power Research Institute along with Evapco, a company that manufactures heat transfer technology, and energy industry consulting companies WorleyParsons and Maulbetsch Consulting. The team’s charge is to develop a large-scale prototype of an indirect dry cooling system that could be used to retrofit power plants.

A typical power plant uses a heat source like coal, geothermal or nuclear to heat water into steam, which spins a turbine to produce electricity. Most of the steam is saved for reuse by running it through chilled metal tubes to condense back into water. These tubes are cooled by freshwater that is pumped in from nearby sources. The steam that results from the water hitting the condensing pipes is what we see exiting the plants in the giant plumes. A plant can take in nearly one billion gallons of water per day but 93 percent of that is recycled and returned to the natural water source.

“Even though the water is being returned, it is going back into the stream or pond at a much higher temperature, which –in addition to the fact that there is a constant cycle of water removal and return—is often disruptive to ecosystems,” said Ying Sun, PhD, an associate professor in Drexel’s College of Engineering and a lead researcher on the project. “We also must consider that at one point or another this process is tying up more than 40 percent of the freshwater in the country, and that’s simply not sustainable. Our plan is to eliminate water from the cooling process altogether.”

Sun and co-investigators Grace Hsuan, PhD, a professor in the College of Engineering, and Matthew McCarthy, PhD, an assistant professors in the College, are planning to replace those cooling waters with beads of paraffin wax that can do an even better job of absorbing and disbursing heat. 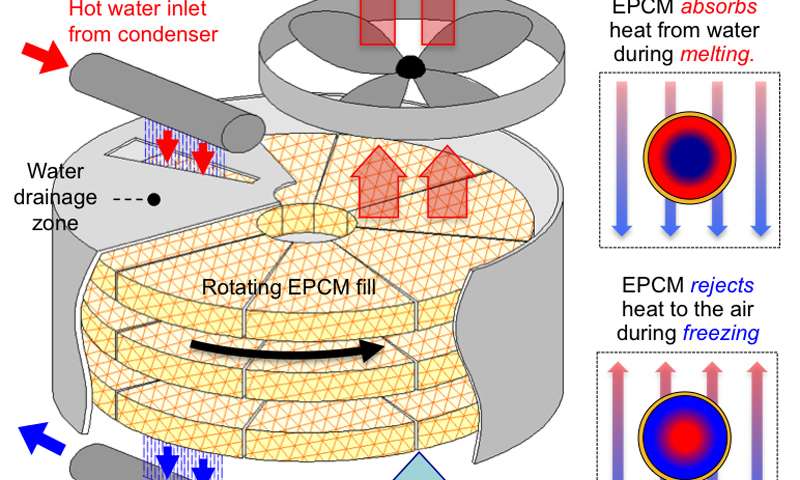 Drexel researchers are developing a way to cool power plants without having to use water.

“Paraffin has unique properties when it comes to heat transfer,” Sun said. “It is what we call a ‘phase-change material’ so, like water, it can exist as a liquid or a solid. But we can engineer the wax to absorb a great deal of heat and to withstand a wide variety of ambient environmental temperatures. So substituting it for water actually brings a number of added benefits in addition to freeing up more than a third of the nation’s surface freshwater.”

The group’s design uses large mesh disks, 20 meters in diameter, woven from quarter-inch-thick tubes filled with tiny bead-like capsules of paraffin just a few millimeters in diameter. The discs would be stacked 15 meters-high in a cylinder the team calls a “rotary heat exchanger unit.” With the look of a sophisticated water wheel, the unit will have openings on the top and bottom for hot water to flow in, cooled water to drain out and ambient air to keep the system moving.

As the hot water enters the unit from the steam condenser, the beads in the mesh will absorb the heat. The discs will continue to rotate as the water enters the unit. When the heated portion of the disc reaches the cooling side of the unit, ambient air is pumped in to let the beads release the heat before returning to the atmosphere outside the plant. The cooled beads spin back to the other side as the disc rotates, ready to repeat the process.

With eight of these rotary heat exchanger units installed in a typical power plant, Sun estimates that the dry-cooling system could be as much as four times more efficient cooling hot water. Another advantage she notes is that the system would lessen the amount of efficiency-sapping backpressure caused by steam buildup.

“Because we are using small beads woven in a mesh, we are doubling the surface area of the cooling system, as a result we estimate that it could be as much as four times more efficient at transferring heat from the water to the outside environment,” Sun said.

A coolant for all climates

Another advantage this design offers is the ability to be adjusted to function in a variety of environments. Many water-cooled power plants must reduce their output, or even shut down in extreme cases, during heat waves and droughts. This is because the temperature of the coolant water that’s being drawn into the plant is reaching levels at which it can no longer cool the system. Most plants require their coolant water to be below 80 degrees.

In addition, during stretches of hot weather, it is difficult for the plants to get the temperature of the recycled coolant water lowered to a level where it is environmentally safe to be returned to its source. High effluent temperatures could kill plant and wildlife living in the body of water—which is likely already experiencing a temperature spike.

This sort of extreme conditions occurred most recently in August of 2012 when a record heat wave raised the temperature of the Long Island Sound and forced a 12-day shutdown of a reactor at the Millstone Power Station in New London, Connecticut.

The researchers are studying ways to change the melting point of the paraffin so the beads could be tuned for use in a broad range of conditions.

“By adding particles like graphene to the paraffin we can make it conduct heat more quickly,” Sun said. “This property, combined with a greater surface area of capsules can improve heat transfer properties of the system quite a bit.”

If all goes to plan, the team will have a lab-scale prototype by the end of 2016, with the goal of a much larger version to be built in Evapco’s Maryland facilities by 2018.

“While we have been developing dry-cooling methods for several years as part of research funded by the Electric Power Research Institute and the National Science Foundation, but working with the industry partners on ARPA-E’s project will give us the additional resources to bring our research to fruition,” Sun said.