Biofuels that Save Water and Land

Though liquid fuels derived from plants have the potential to shift energy production to much cleaner products and practices, to date the environmental benefits do not yet surpass the risks, according to a number of influential studies including a 2009 United Nations report. 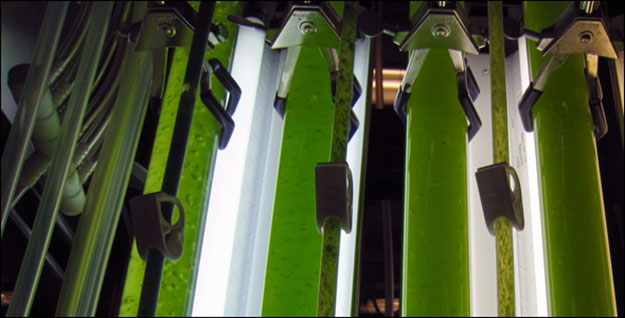 Students at the University of Michigan are working to create algae-based water treatment and bio-energy systems, like this photobioreactor shown above. As the algae grows and takes up nutrients from its surroundings, it accumulates lipids that are later converted into biodiesel.

That tilt may soon be righted by researchers at the University of Virginia and the Seawater Foundation, who discovered that the most important source of the risk-benefit imbalance was the heavy reliance on fresh water and the need for petroleum-based fertilizer to improve plant productivity. Researchers at both organizations substituted wastewater rich in organic material and developed much cleaner and efficient practices for biofuels development.

Andres Clarens and colleagues in the Civil Engineering Department at the University of Virginia found that algae production could be cleaner and municipal wastewater treatment costs could be reduced if the two processes worked together symbiotically.

One option studied by Clarens’s team includes growing algae in nutrient-rich wastewater, which reduces the need for synthetic fertilizer. In turn, the algae remove nutrients from the water and save energy by doing part of the treatment plant’s work. The consequence of scaling up the team’s work is potentially immense.

“The nice thing about partnering with a wastewater treatment facility is the financial incentive for them. And it’s a win-win by reducing the algae’s footprint,” Clarens said.

A recent study by Clarens and his colleagues at the University of Virginia found that algae fares worse than switchgrass, canola and corn in energy use, greenhouse gas emissions as well as water use. “Indirect water use is the real contribution, having to produce a lot of things upstream of the cultivation,” Clarens told Circle of Blue. “There’s the power to run the plant, making the fertilizers – this is where we saw a lot of the impact.”

This systematic view of energy also underlies the production process for another biofuel for jet aircraft.

Carl Hodges, an atmospheric scientists and founder of The Seawater Foundation, has pioneered a multi-stage form of agriculture called integrated seawater farming. The goal is to use waste material from one crop as a productive input to grow something else.

Hodges conducted his research in arid, coastal regions where high-quality land and freshwater supplies were limited. He piloted the program in Africa and has since launched a second farm in Mexico.

His system begins with a canal dug inland from the ocean. Seawater fills aquaculture ponds for raising shrimp, fish, and seaweed. Wastewater from the ponds is then diverted to fields planted with salicornia, a saltwater-tolerant plant that grows in sandy desert soils. Salicornia is harvested for its oil, which is refined into a biofuel.
The water then flows to mangrove wetlands, which are full of trees and plants that grow in saline coastal habitats. The trees can be monetized as carbon credits, while their wood is used for timber.

The biofuel component has drawn the attention of several large corporations.

Boeing, Honeywell and Etihad Airways announced in January that they would partner with the Masdar Institute of Science and Technology in Abu Dhabi to develop saltwater-tolerant biofuels on a commercial scale through the Sustainable Bioenergy Research Project. The project will use Hodges’ integrated seawater farming system to produce jet fuel.

Hodges, who could not be reached for comment, has been named a special advisor to the project.

“We are forging our energy future by developing a renewable fuel supply now, not when fossil fuels are depleted,” said Jim Albaugh, president and CEO of Boeing Commercial Airplanes, in a news release. “Developing and commercializing these low-carbon energy sources is the right thing for our industry, for our customers and for future generations.”

Brett Walton is a reporter for Circle of Blue. Reach Walton at brett@circleofblue.org, and read more of our Water+Climate: Energy coverage here.