A World of Water Woes

It’s easy to look at a portrait of Earth and think of our home as a water planet. After all, 75 percent of the surface is covered with water. But the thin skin of liquid that surrounds our rocky home is misleading—if you took all the water on the planet and bunched it into a ball, that ball would be less than half the diameter of the Moon. That’s not a huge amount of water. 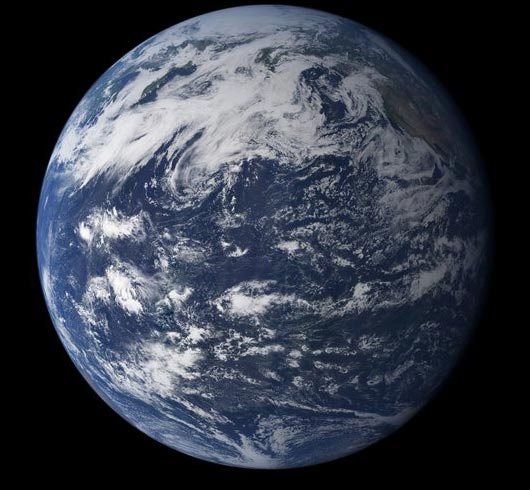 Plus, the proportion of water that humans can use for daily use is actually pretty small. Most of the world’s water is saltwater in the oceans. Only about three percent of the water is fresh. Half of that is locked in glaciers, the polar ice caps and snow.

Almost all of the rest flows through the world’s lakes, streams, rivers, soils and groundwater. A tiny percentage is water vapor in the atmosphere, driving our weather and climate. That doesn’t leave much for the 7 billion people on the planet, and even less for some populations because all that water isn’t evenly distributed.

Today is the U.N.’s World Water Day, a chance for us to pause and reflect on this uneven distribution. Here’s a look at some of the most water-stressed places on the Blue Planet along with some of the actions these regions take to worsen or manage their water woes:

It’s not exactly a surprise that desert countries would have problems with water scarcity, but poor water management is exacerbating the situation on the Arabian Peninsula. In the Untied Arab Emirates, for example, per capita water usage is twice the world average.

Some nations have tried to feed their water-hungry populations with energy-intensive desalination plants that turn saltwater into fresh. But those plants and their super-salty byproduct can damage local ecosystems. People on the peninsula have also been drawing from a huge aquifer that lies beneath the parched Saudi desert. Forty years ago that aquifer held enough water to fill Lake Erie, but a growing population and decades of intense farming have drained four-fifths of the underground stores.

The vast blue water that surrounds these islands lures tourists by the millions, but that’s not the kind of water that a population can rely on for much besides delicious seafood and transportation. Rainwater capture has been employed in the region for centuries. But most islands have to draw from groundwater stores for freshwater for agriculture, tourism and household use.

There’s growing concern, though, that climate change may lessen rainfall in the area, which would limit the ability of the already-vulnerable underground water sources to recharge. Where there is money to do so, desalination plants are being built. But some island nations are realizing that there is a need to adapt to a water-scarce existence. Barbados, Jamaica and Trinidad ordered water rationing in 2013, and Barbados also began to recycle some of the water the country uses.

With the verdant Nile running through its desert, Egypt is one of the few Mediterranean nations that isn’t experiencing a high or extremely high level of water stress (defined by the World Resources Institute as a ratio of total withdrawal to total renewable supply of 40 percent or more). The Mediterranean is a region of the world that receives little rainfall but has a large population, resulting in the lowest per capita water availability in the world—2,691 cubic meters per year compared with a global average of 7,176 cubic meters per year.

That water scarcity has contributed to “water wars” in Spain, riots in Algeria and conflicts in places such Israel, Jordan and Syria, which have competing claims to water from the Jordan River.

From Iran and Pakistan along the coast of the Indian Ocean north to the southern border of Russia, the nations of Central Asia all qualify as having extremely high water stress, meaning that they draw 80 percent or more of their renewable water supply in a year, and it’s contributing to already unstable situations.

In Iran, for instance, home of the world’s most water-stressed river basin, there have already been angry protests about government water diversions and there is worry that water could be a major source of instability in the country. Pakistan’s water scarcity is now considered as big a threat as terrorism. In Afghanistan, 43 percent of local conflicts are over water, according to Oxfam.

The potential impacts of such water problems extend beyond these nation’s borders, according to a 2011 report [pdf] from the Senate Committee on Foreign Relations:

In Central and South Asia, particularly in Afghanistan and Pakistan, the impacts of water scarcity are fueling dangerous tensions that will have repercussions for regional stability and U.S. foreign policy objectives. The national security implications of this looming water shortage—directly caused or aggravated by agriculture demands, hydroelectric power generation, and climate instability—will be felt all over the world.

Australia has had to deal with water stress for a long time: The country sits on the world’s driest inhabited continent (Antarctica is drier) and average rainfall has dropped by a third since 1980. The government built dams to capture and store water, installed systems for recycling wastewater and collecting rainwater and built desalination plants to supply the country’s large cities.

The nation also made policy changes to the legal system of water allocation, finding the delicate balance between the needs of agriculture, industry and growing cities and towns. The changes, though difficult to implement, are credited with helping Australia survive a historic drought and has now made the country a model for the rest of the world.

Mexico and the Southwest United States

The Colorado and Bravo/Rio Grande river systems rank among the world’s most stressed. Agriculture, growing populations and industry all compete to take water out of these two river basins, and climate change is working to put less water in. But there’s some good news for the Colorado: Water will soon flow into the river’s delta for the first time in decades.

On March 23, operators of a dam along the U.S./Mexico border will open the gates and let water once again flow into the delta area for a few weeks. It’s just a small experiment meant to mimic a spring flood, but scientists hope that it might be a good sign for the future of a once lush and diverse delta ecosystem.