Water: The World Is Facing a Dire Shortage of This Essential Element

When it comes to our water supplies we are trusting the wrong people and that trust will hurt us in ways we will regret. The waters, the rivers of life are precious to those who value life.(1) To certain others, they are just things to throw trash into, to pollute, and to make money off of at the expense of destroying the environment. Life is just unthinkable without water, for we cannot be separated from water and live. Water is so important that its pollution and poisoning has a direct impact on our health and even on the quality and effect of our minds and feelings. 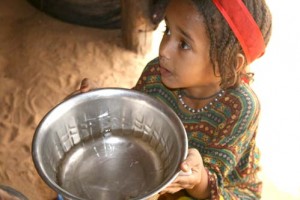 We are the element water and we have reservoirs, ponds, rivers and seas of fluids within us. The flow of blood, the lymphatic system with its fluid movement, endocrine fluidity, urinary fluidity, the fluidity represented by perspiration, saliva, tears, sexual secretions, and lactation are all influenced by water. Clean water is absolutely essential for healthy living. An Adequate supply of fresh and clean drinking water is a basic need for all human beings on the earth, yet hundreds of millions of people worldwide are deprived of this. When you add the fact that most drinking water from public systems are laced with toxic chemicals then we begin to see that its not hundreds of millions who have a problem with water but billions. Even bottled water has its problems.(2) We thus need to take so much care when it comes to the water we drink.

‘If the world’s water was contained in 100 liters or 26 gallons, then what is readily available to us would amount to one-half teaspoon.’ – Dr. Sang Hwang

If there were no water there would be no world as we know it so pollution of our water or the deliberate injection of hazardous chemicals like fluoride and chloramines into it is nothing less than devastating to our biological existence over time. When approaching a topic as big and as important as water we have to have some sense of reverence for there is something sacred, almost sacramental in the very fabric of water. Thus water holds the potential to change our world, to change us. It holds the power of life and death and the most dominant influence over our health. In the Midwest today there is a serious drought that drives farmers and everyone else to think about water more than anything else. Next to our breath there is nothing more important than water.

The connection between water and disease wasn’t established until a scant 100 years ago and the connection between water and human consciousness has still to be discovered. Observant physicians noted early on that not all diseases were transmitted through contact between individuals. The two greatest epidemics of the 19th century — yellow fever and Asiatic cholera showed evidence that some factor other than direct contact with disease victims was necessary to spread the disease. Typhus and waterborne typhoid fever raged through urban areas, proving to be one of history’s most virulent killers. Cholera could wipe out its victims in as little as 12 hours. Cholera is a disease that can take a man suddenly down in good health at daybreak and kill him by nightfall. Water is well capable of being the harbinger of death and disease so it is best to know and understand the water we drink and bathe in. In developing countries, four-fifths of all the illnesses are caused by waterborne diseases, with diarrhea being the leading cause of childhood death.

Medically we are still in the Stone Age when it comes to our understanding of water. Public health officials seem to deliberately choose to remain blind to ever present dangers of all the chemicals finding their way into the public water supplies probably because they are deeply associated with an industry and a medical paradigm that uses toxic chemicals in the form of drugs that are, as we shall see below, also polluting our waters. Water pollution is caused by human activities: 1) By point sources i.e., factories, sewage treatment plants, underground mines, oil wells, oil tankers and pesticides from agriculture. 2) Non-point sources include mercury in the air, acid deposition from the air, traffic, pollutants that are spread through rivers. 3) Chemicals deliberately put in the water like fluoride and chloramines.

Water reminds us of the need to live simply and close to the ground but the lesson has been lost on modern man who has not really comprehended his total dependence and vulnerability to water issues. The CIA considers global water scarcity “a significant issue in security,” said John Gannon, a former CIA assistant director and former chairman of the National Intelligence Council. Even as we continue to take water for granted, things are getting critical as water levels in many aquifers around the world are dropping, in some places by several meters a year.(3) In recent measurements, in Waukesha near Chicago for instance, the water level had dropped about 600 feet with the greatest loss being over the last 20 years. Professor Liu Yonggong, of China Agricultural University in Beijing, indicated that the water table beneath much of the North China Plain, a region that produces some 40 percent of China’s grain, has fallen an average of 1.5 meters per year over the last five years.

An unexpectedly abrupt decline in the supply of water for China’s farmers poses a rising threat to world food security. China depends on irrigated land to produce 70 percent of the grain for its huge population of 1.2 billion people, but it is drawing more and more of that water to supply the needs of its fast-growing cities and industries. As rivers run dry (4) and aquifers are depleted, the emerging water shortages could sharply raise the country’s demand for grain imports, pushing the world’s total import needs beyond exportable supplies. Since 1950, the population of China has grown by nearly 700 million, a staggering increase. Since 1950, the global renewable freshwater supply per person has fallen 58 percent as world population has swelled from 2.5 billion to 6 billion. With finite and diminishing water supplies the human race is like a fast moving car about to collide with a solid wall of water scarcity, which is not being helped at all by the global warming effect and the weather changes it is bringing throughout much of the world.

The Yellow River water in China is now loaded with heavy metals and other toxins that make it unfit even for irrigation, much less for human consumption, along much of its route.

None of the proposed solutions to the water crisis — importing water, water conservation, expanded use of desalination of seawater or developing genetically modified crops that use less water — will be “sufficient to substantially change the outlook for water shortages in 2015,” according to Global Trends 2015, a report by the intelligence council. Agriculture accounts for two-thirds of water use worldwide and 80 percent to 90 percent in many developing countries. Some of this is already coming home to Californians who, as of New Year’s Day 2002, have had three of their eight water pumps on the Colorado River shut down by federal order. Now, much less water is churning down the 242-mile aqueduct toward coastal Southern California, where 17 million people rely on snow-melt from the Rocky Mountains for washing dishes, flushing toilets and watering lawns. This is a pivotal moment in the contentious history of water in the arid West and in many other places around the world. We are just at the beginning of a problem that has no way of going away.

‘The frog does not drink up the pond in which he lives.’ – American Indian Proverb

1. Oceans contain 97 per cent of our planet’s water but it is too salty for drinking, irrigation or industrial use. Only 3 per cent of earth’s total water is considered fresh water. About 2.997 per cent of this fresh water is trapped in polar ice caps and deep within earth’s surface which is too costly to extract. Thus only .003 per cent of earth’s total available water by volume is available for human use. The global picture of water is not pretty with some 1.1 billion people still lacking access to improved drinking water sources and some 2.4 billion to adequate sanitation.

2. In March of 1999, the Natural Resources Defense Council (NRDC) released a report called “Bottled Water, Pure Drink or Pure Hype?” NRDC’s report points out that as much as 40% of all bottled water comes from a city water system, just like tap water. Federal regulations that govern bottled water only require it to be as good as tap water, not better. There are no assurances, regulations or requirements that bottled water be any higher in quality than tap water.

3. Iran. The water table is falling by 2.8 meters annually in the agriculturally rich Chenaran Plain in northeastern Iran. That, coupled with the cumulative effect of a three-year drought, has driven people out of the region, generating a swelling flow of water refugees.

4. Egypt. Egypt is entirely dependent for its water on the Nile River, which is now reduced to a trickle as it enters the Mediterranean. Neither Egypt, Ethiopia, nor Sudan can increase its take from the Nile except at the expense of the other two countries. Populations in these three countries is projected to climb to 264 million in 2025 from 167 million today. A quarter-century ago, with more and more of its water being pumped out for the country’s multiplying needs, the Yellow River began to falter. In 1972, the water level fell so low that for the first time in China’s long history it dried up before reaching the sea. It failed on 15 days that year, and intermittently over the next decade or so. Since 1985, it has run dry each year, with the dry period becoming progressively longer. In 1996, it was dry for 133 days. In 1997, a year exacerbated by drought, it failed to reach the sea for 226 days. For long stretches, it did not even reach Shandong Province, the last province it flows through en route to the sea. Shandong, the source of one-fifth of China’s corn and one-seventh of its wheat, depends on the Yellow River for half of its irrigation water.