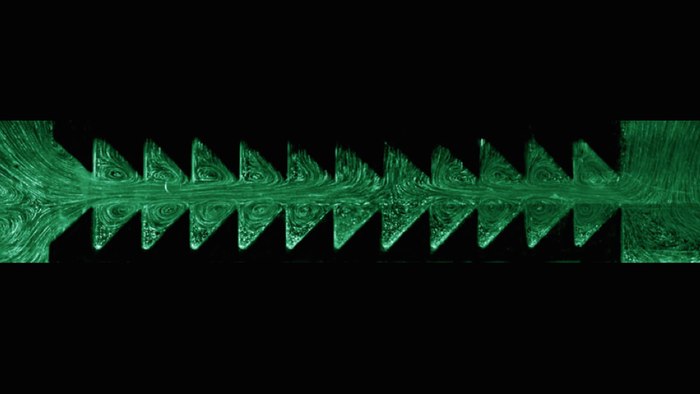 Fluid is ratcheted through a gap between the pump’s teeth

In most pumps, either a spinning impeller pulls liquid in and then essentially “throws” it out via centrifugal force, or a rotor draws it through using peristaltic force. After studying how birds’ flapping wings use fluid dynamics to push air back while moving the animals forward, however, two scientists from New York University have developed a pump that works in yet another fashion – and it has teeth.

Created by NYU researchers Benjamin Thiria and Jun Zhang, the pump consists of two facing panels with a gap between them, that gap connecting chambers of water on either side of the setup. On the inside surface of each of those plastic panels are 12 saw-like teeth that are asymmetrical, in that each one slopes back instead of forming an equal-sided triangle.

By rapidly vibrating the upper panel, the gap between the two is made to repeatedly open and close. When it closes, water that was in it is forced out. Because of the asymmetric shape of the teeth, though, that fluid doesn’t simply squirt out both ends of the gap. Instead it follows the path of least resistance, moving in the direction of the slope of the teeth. This essentially ratchets it through the gap, from left to right. When the panels part again, more fluid rushes in (mainly from the left), and the process is repeated.

Among other applications, Thiria and Zhang envision their pump being used in industrial settings where machinery is already vibrating. Those vibrations could be put to use operating one of the pumps, which could in turn be used to circulate coolant through the machines.

Additionally, by installing a pump in a space between two already-vibrating surfaces, the noise caused by those vibrations should be reduced.

A paper on their research was published this week in the journal Applied Physics Letters.