Showers are one of the top contributors to water usage, and waste, in the household. The makers of the Eva Bluetooth-connected shower head claim it can help you cut that water consumption in half by making sure water only pours down when you actually need it. A free companion app also tracks your water usage, compares it with other users and motivates you to keep saving in the long run, aiming to have the device pay for itself in just one year. 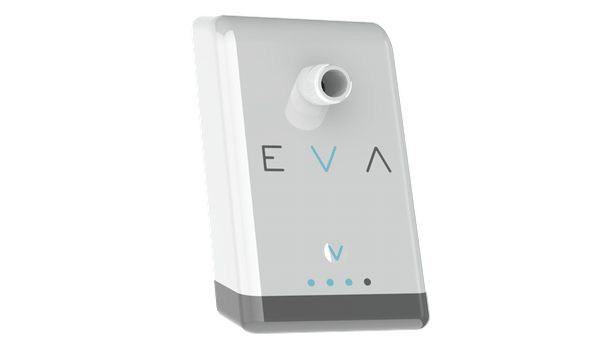 The Environmental Protection Agency (EPA) puts the average shower at 8 minutes and 18 gallons (about 70 liters) of water, amounting to over one trillion gallons (3.8 trillion liters) a year for the US alone. As droughts are making water a very expensive commodity in some places, we’re seeing all sorts of new approaches to reducing water consumption in the shower, ranging from closed-loop recycling adapted from the Space Shuttle to systems that inject tiny air bubbles into the water droplets.

Compared to some of its predecessors Eva is a much less extravagant system, but still promises substantial savings on your water bill. It works by addressing three poor user habits that lead to great amounts of waste: letting the water run longer than needed as we’re waiting for it to heat up; keeping the water pouring even as we’re away from the water jet; and lastly, taking unnecessarily long showers when a shorter one would suffice. All of this is combined with a smartphone app that tracks your “shower stats” over time and implicitly encourages you to do better every time. 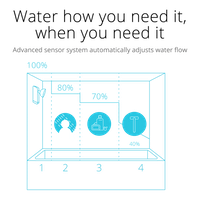 As soon as water stars pouring, Eva keeps an eye on water temperature. When the desired level is reached, the shower head automatically notifies you that it’s time to enter the shower and shuts down water flow, only resuming once it has detected your presence. After you enter, the intensity of the water jet depends on how far you are from the actual shower head, so that water doesn’t keep wastefully pouring at full tilt as you temporarily step away to shampoo your hair. Finally, Eva also reminds you to step out of the shower if you’re taking too long. 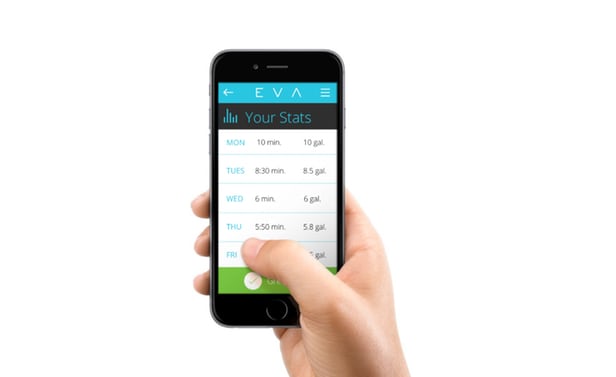 The creators of Eva tell us you’ll be able to tweak different preferences from the free companion smartphone app, including water temperature, shower length, water flow and “zone” settings (each zone, defined as your distance from the shower head, can be assigned a different level of water flow). The app also keeps track of day-by-day shower length and water usage, comparing it to other Eva owners and encouraging you to form water-saving habits. In a way, this is a Fitbit for your shower that, in a family of four, aims to pay for itself in just one year.

The device uses standard half-inch shower head connections that will reportedly work for most showers, though the creators advise sending them a picture of your shower piping should you have any concerns.

Eva has just hit Indiegogo for crowdfunding. At the time of writing, Eva pledge levels of US$109 are still available. If all goes to plan, the smart shower heads are expected to be delivered by December next year.

You can watch the crowdfunding pitch in the video below.